Escape from Tarkov is a pretty big game that uses a dynamic in-game economy to decide what equipment you can use. While progression locks away certain items, the risk or benefits from using or losing certain equipment on a raid really makes the decision on what weapons you can take in. Escape from Tarkov Shotguns might be governed by how much cash you have to spend on them, but there are also some key differences in terms of their stats. Doing better in raids doesn’t have to depend on having the highest level skills, or the cash to buy healing equipment. You can help yourself out by making sure you’re using the best weapons.

When it comes down to choosing weapons, you’ve got to balance all of these concerns. You need to find the nice middle ground between the weapons that function the best with the right stats, and those that are affordable. This guide covers the shotguns in Escape from taro, which ones are the best to use, and which give you the best value. There are some shotguns that while they don’t have the world’s best stats, they do offer significantly better value than others.

When Are Escape from Tarkov Shotguns Viable?

Escape from Tarkov shotguns are a little controversial in-game. Some players doubt that they are all that valid in-game overall. However, there is a time and a place for shotguns. With a good deal of spots for interior combat on quite a few of the Escape from Tarkov maps, these guns can be well utilized. However, to do this you need to be able to fire off a shot quickly. Tarkov uses pretty realistic gunplay. More often than not shotguns are a little too risky to take the shot with.

If you can push through this though, a shotgun can be an effective part of your loadout. On maps like Interchange, certain playstyles can really reward an effective shotgun player.

In terms of price, this Escape from Tarkov shotgun sits somewhere in the middle of the range. It isn’t going to break the bank if you use it, but it doesn’t offer all that much more to you than a cheaper shotgun. The pump-action slows things down in this game, which can be difficult.

While the recoil and damage of this shotgun are pretty good, the pump-action just slows things down too much. It becomes too difficult to follow up on your shot, which is an issue. This makes every flaw of Escape from Tarkov shotguns worst. This isn’t an ideal choice.

This shotgun is cheaper than the majority of other pump-action weapons. However, it doesn’t add all that much with accuracy or speed. The damage is decent, but recoil can become a problem. It suffers from many of the same flaws as the M870. It simply lacks the ability to get off a shot when you need to follow up.

This shotgun is on the more expensive side. For this extra money, you do get a few positives but they’re not really worth it overall. This is an Escape from Tarkov shotgun that you’re better off avoiding for the most part. It offers neither the best potential for getting results or the value of a solid mid-tier shotgun. Your best bet is to sell this off.

The Saiga is a great choice for a shotgun since it compensates for all problems with the weapon. You can get shots fired off at a pretty good speed as long as your aim and reaction times are right. On top of this, it does good damage and has a decent spread that should keep these shells hitting their targets. While this might be the best shotgun on stats and feel alone, it is on the more expensive side of things. This is a great shotgun if you’re certain you can afford it as a side piece of equipment.

The TOZ-106 is the best choice for an everyday shotgun. It isn’t the most expensive, but has some of the best stats and stopping power. This Shotgun offers by far the best value. The more expensive shotguns just don’t particularly add much. For pretty much any loadout, this is a really solid choice for a Shotgun.

Those are all of the shotguns in Escape from Tarkov. There are two standout weapons. One suits players on a budget, and the other is more for special occasions. Shotguns are a pretty under-used weapon in the game. If you can master using them effectively, you do have a good advantage over Scavs that like to get in close. However, you will need to be quick to fire and have a steady hand to aim. 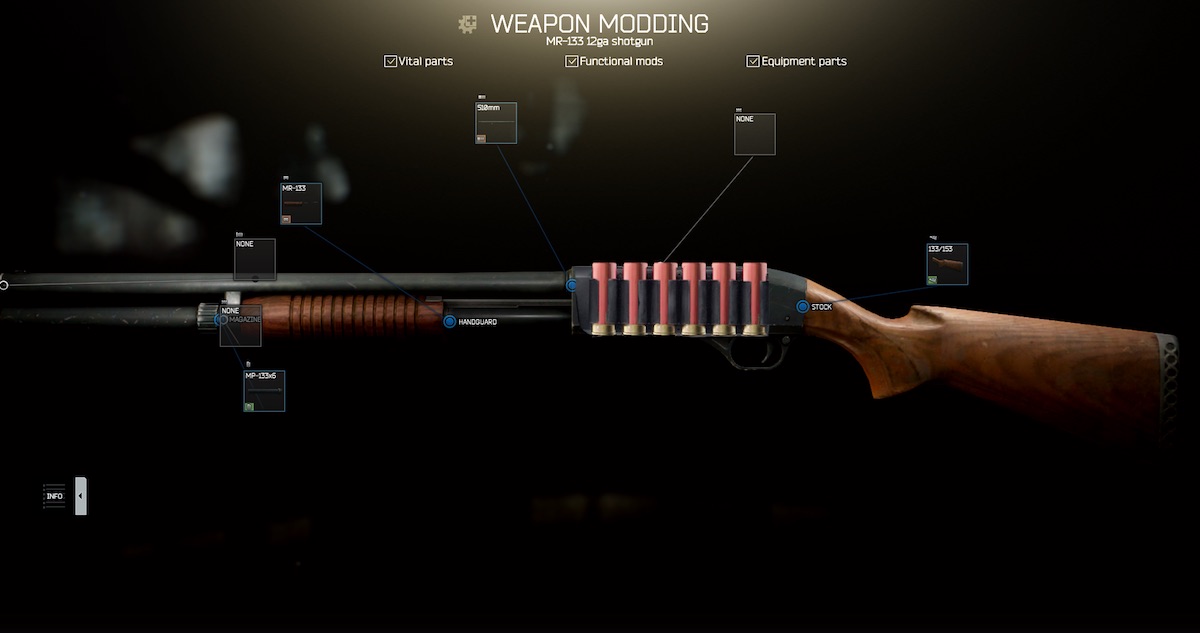