Valorant is the latest game to capture the attention of players and streamers. Just about everyone is trying to play Valorant or get a key to play Valorant at the moment. Once you get in, you’re gonna want to play your best. This best Valorant weapons guide covers which weapons you should use in the game. As with any other shooter like Fortnite or Warzone, weapons in Valorant aren’t created equal. There are some that are clear standouts over others.

All weapons in Valorant have their pros. There aren’t any that are inherently terrible. That’s aside from the free pistol, which isn’t great. For the most part though, you’ll have better results if you go for the best Valorant weapons. These are the guns that are going to perform the best and give you the best chance to get other players. These are the weapons that have the best stats in the game.

While you can’t always use the best weapons, these are the ones to try and go for. Learning which are the best Valorant weapons can help you perform better every time.

Rifles are a standard weapon in Valorant that a lot of players are going to rely on. All of them cost around 2,700-2,900 creds, so there isn’t a big difference in cost. They can typically kill an enemy in a single shot or two shots. Obviously you’ll want to go for the ones that can get you the most kills, and the quickest. These are the rifles available in Valorant:

The Vandal and Guardian are the better choices for rifles in Valorant. You should go for whichever suits your play style the best. 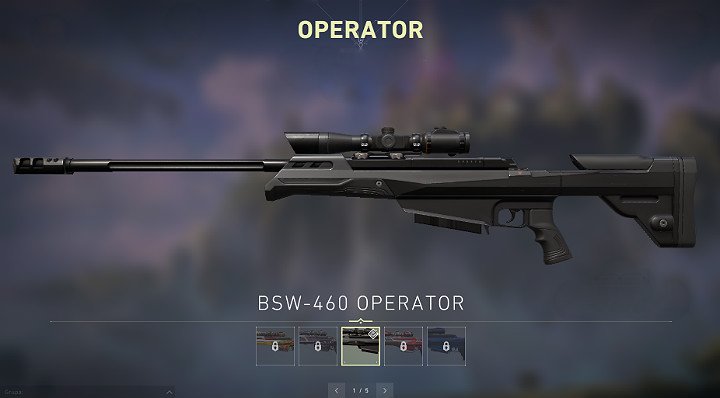 Sniper rifles can be a harder class to play in any game. There are some effective ways to snipe in Valorant though. If you’re a great sniper in other games, this should translate pretty well here. These are the sniper rifles currently available:

Sidearms are an often overlooked area in every game. You get a free pistol in every game anyway. Most players rarely bother to replace it with another sidearm, since other weapons are more effective. However, relying on a pistol is a pretty good option in some situations. These are the sidearms available at the moment:

Submachine guns are on the whole a lot cheaper than rifles. This is one of their main appeals. Some players can keep going with a submachine gun and try to stick with it, but they’re typically replaced by a rifle or machine gun. If you like to use submachine guns, these are your options in Valorant:

Shotguns are pretty specialist and only really work in some situations. However, when you find yourself in a close combat situation they are the best Valorant weapons for you.

Machine guns are underrated as a weapon in Valorant. They aren’t great in all circumstances, but they can be fantastic in the right position. They work on the defensive and to push players. These are Valorant Machine Guns currently available.

Which are the Best Valorant Weapons?

There are a lot of weapons in Valorant, but each category has some stand out weapons. These are the best Valorant weapons in the game at the moment:

Each will suit a different play style and situation. However, those are definitely the weapons to go for when you can. Our other Valorant guides can help you master the rest of the game: