Every new season of Fortnite brings new additions and changes to the game, increasingly these changes change the Fortnite map in major ways. The current map bears little resemblance to the original, while it has the same geography the metagame and tactics of each location are completely changed. This guide to the Season 9 map will help you decide where to land in this new Fortnite map to win more games.

Season 9 has completely renovated many areas, but there are still some older additions to the map that are worth visiting. The desert and snow biomes each have their fans and their uses for certain styles of gameplay. The changes to tilted towers and Retail Row are the major additions for the Season 9 map and have an impact on most player’s landing plans. However, as usual, where to land is going to depend on what you want from a game. 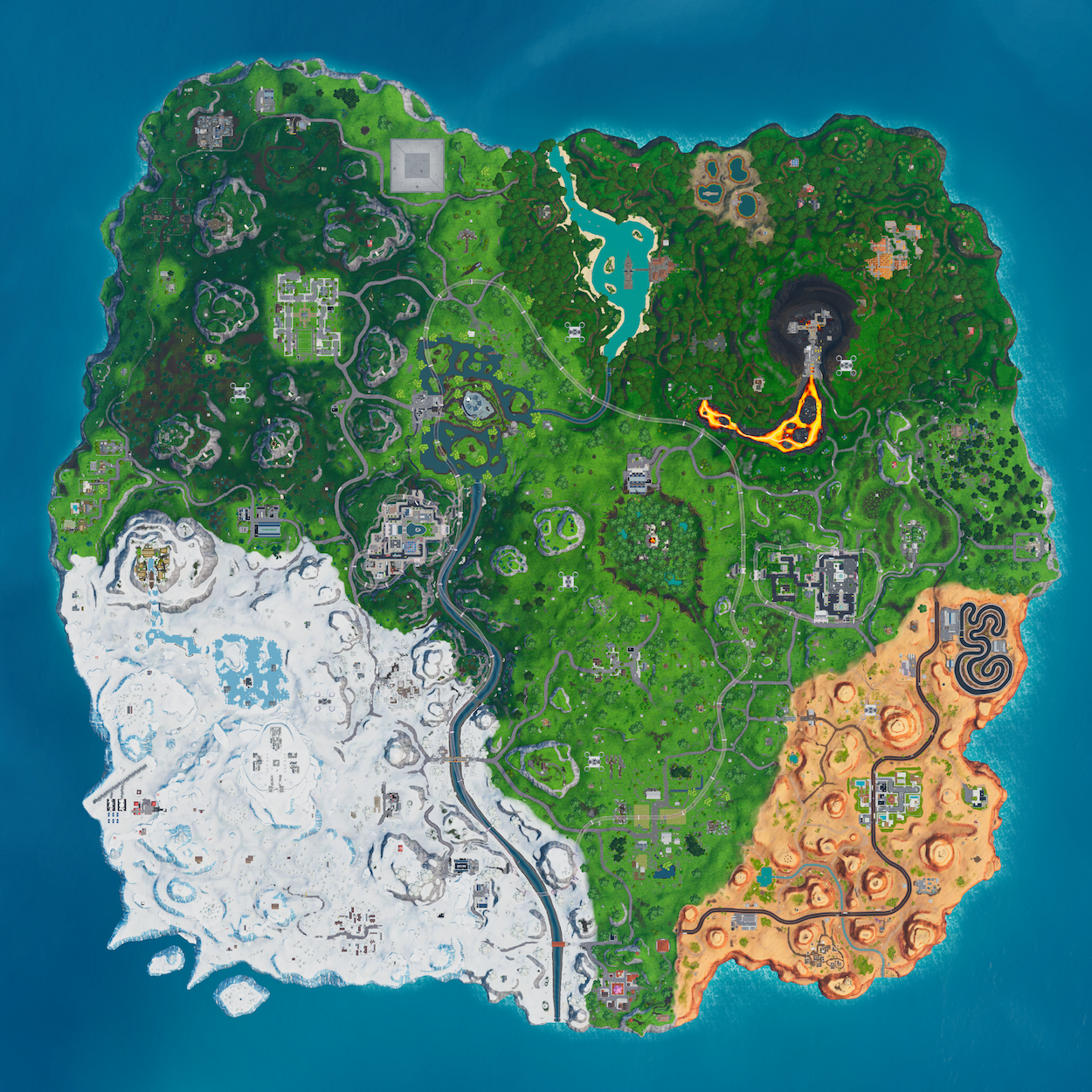 The exacts of the map may have changed but the fundamentals remain the same. If you want to survive for any period of time in Fortnite you have to play to your strengths. When you chose a location to land you need to know what type of game you’re going to be playing. Are you practicing your firefighting? Do you want to win? Are you playing a stealth game? Hunting for Fortbytes? The answer is going to determine your landing spot.

If you’re looking for a fight, whether to practice or just to show off your prowess, the more popular areas are where you should go for irrelevant of the trajectory of the bus. Certain spots will be busy no matter where the bus takes you.

If you’re trying to avoid other players and play a stealthier game, then you need to time your jump right. A good rule is to jump later for more safety. Most players are itching to get out of that bus and start racking up kills. Jumping late lets you drop into relatively unpopulated areas and loot without much interference or trouble.

If you’re after Fortbytes, it is going to take you a few games to collect them all. Go through this guide and try to land in positions to collect a few Fortbytes in a single game. This will help you make better use of your time. This way you can collect all the Fortbytes on the Season 9 map as quickly as possible.

The Volcano and Lonely Lodge 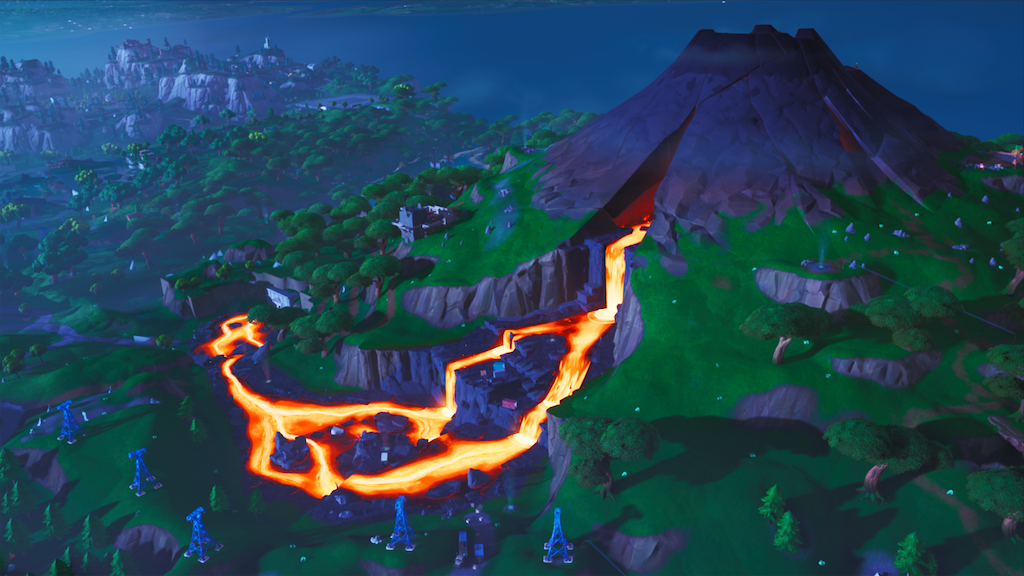 The Volcano’s day in the sun has probably passed. However, that hasn’t stopped it from being a solid landing choice in the Season 9 map. At the base of the Volcano, there are a number of research stations buried in the jungle. This concentrated area is a solid place to load up on loot in relative safety. Most players don’t bother with these buildings so they are a great place to avoid a fight. This spot is also relatively well placed to reach anywhere the circle might appear.

Lonely Lodge is one of the most reliable spots in Fortnite for you to land. Throughout many seasons it has stayed as a fairly unpopular spot with good loot. There is a mansion just east of the lodge that isn’t quite what it was but is still a good starting point. From here you can head through Lonely Lodge and even take up a position in the sniper’s nest. Lonely Lodge isn’t fantastic for providing for a whole squad. If you’re playing on Solo or Duos you should have plenty of luck in this area.

Inside the Volcano in the Season 9 Map

During the last season dropping inside the Volcano was a good place to get a few chests, but not a great starting place. In the Season 9 map, this location has been completely revamped. It is now home to Pressure Plant. This area is absolutely crammed with loot. Between its many huts and towers, you will find plenty of equipment for even a whole squad.

This isn’t the most isolated spot on the map so you might have to be ready for a fight. However, during most games, you should manage to raid this spot with relatively little resistance. 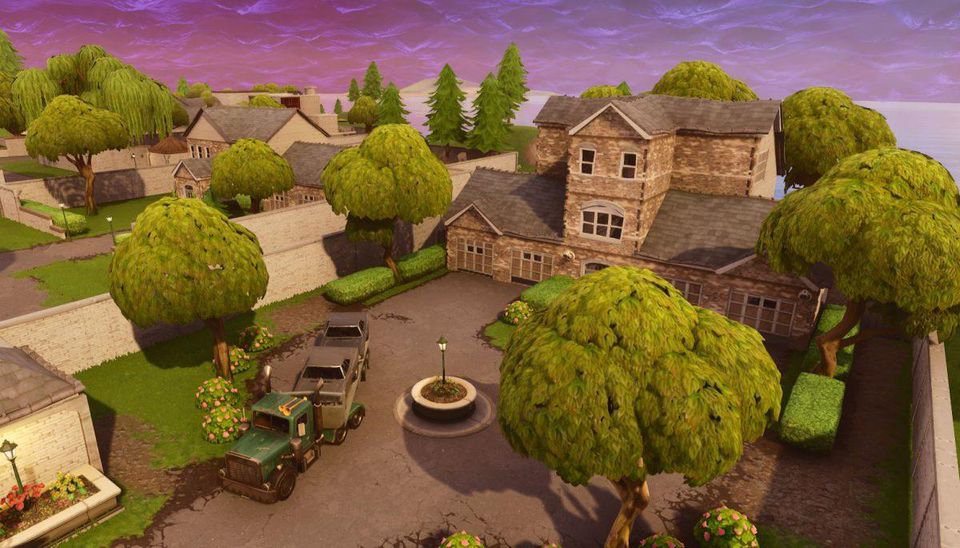 Much like Lonely Lodge, Snobby Shores might change a bit but its relevance doesn’t. Snobby Shores can easily provide you with the materials for a whole game if you’re an efficient looter. You will need to tackle more than one of the houses to stand a good chance of securing high-level loot. For a team, you should split up and tackle a building each. As a relatively remote location, you’re unlikely to run into much resistance. Snobby Shores also contains a few vehicles for you. This makes it a great spot in the Season 9 map to do some risky looting. You should be able to escape the storm pretty quickly if you move fast enough.

Places to Land for Firefights in the Season 9 Map

Old habits die hard and remade or not remade Fortnite players will drop right into Tilted if they’re after a fight. Neo Tilted seems even more designed for early firefights than the original incarnation. If you’re trying to load up on loot or practice shooting, then Neo Tilted is definitely the place to be.

Fortnite Season 9 has introduced hot Spots to the game. These locations are selected at the beginning of each game and contain an extra amount of loot. With this on offer, you should be able to get equipped for an entire game pretty easily. You can find the best weapons in Season 9 here. However, they are also a magnet for other players. If you drop into a hot zone you need to be able to start fighting almost immediately. They’re a great spot for the adventurous player.

While locations might have changed with Fortnite Season 9, the fundamentals haven’t. If you’re out of the practice with the game or only just coming into Fortnite now, this is a good time to optimize your settings. You should also refresh yourself on the basics like sniping, building, close combat, and the best weapons in the game.

Improve Your Frames Per Second in Fortnite