The first season of Call of Duty Cold War has launched bringing a lot of new content to the game. The biggest out of all this content is the brand new weapons, the MAC-10 and the Groza. The Groza is an assault rifle, and a versatile one at that. This weapon could be one of the most effective in Cold War once it is in the right hands. However, as with any other Cold War weapon, the Groza is only as good as the loadout it is part of. You need to be using the best Groza loadouts in Cold War. The right combinations of equipment and attachments can make this weapon go a lot further.

The Groza is a fully automatic assault rifle, it’s easy to handle, has a great speed and a pretty decent damage rate. The range isn’t as good as some other ARs, but the Groza is a great weapon to start within Cold War. It doesn’t have any major drawbacks, so picking the right attachments can go a few different ways. As a pretty versatile weapon, there is a lot of room to maneuver in the best Groza Assault Rifle Loadouts. The weapon comes close to the speed of an SMG in the right build. This is what you need to know:

How to Unlock the Groza in Cold War 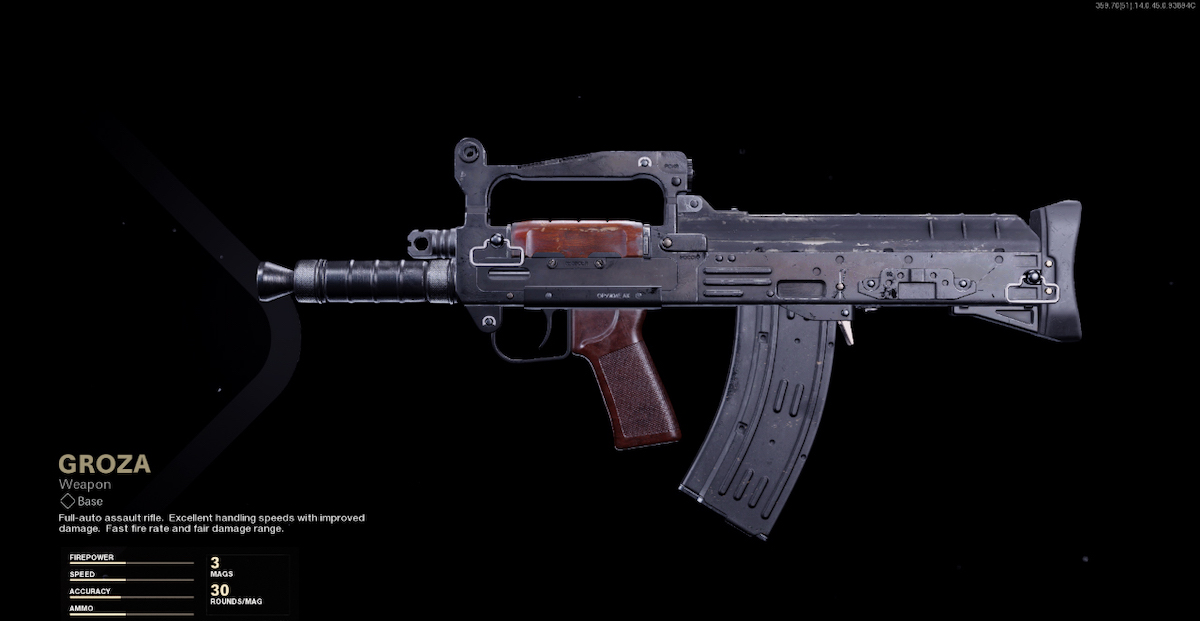 These new weapons are an exciting addition, but you’ll need to grind your way up a bit to actually unlock them. To unlock the Groza in Cold War you’ll need to reach Tier 30 in the Battle Pass. This shouldn’t take too much time to reach, although it is harder to unlock than the other new weapon. If you don’t want to grind, you can buy the tiers instead although this is going to cost you.

The Groza is a fun weapon in Cold War that takes and combines aspects of an AR with the higher fire rate and power of an SMG. These are some recommendations for the best attachments for the Groza in Cold War:

These attachments should help to reduce recoil and increase the range. The range is the only real drawback of this type of weapon, so this set should help to increase it. There are also some bonuses for the damage rate, increasing the already high stats for this weapon.

The Semtex offers a benefit when it comes to speed for the best Groza loadouts in Cold War. However, the Frag can work well as well, especially if you’re more attuned to using this kind of equipment. The Stun grenade is useful for pushing ahead fast and rushing through territory, a particular strength of the Groza.

Flack Jacket and Ghost are two more general recommendations, they help to keep you hidden on the minimap and reduce some damage. Other perks can be substituted into the best Groza loadouts in Cold War though. The other perk is Quartermaster. This one helps you get acess to equipment quicker. The main advantage is to speed up your gameplay with the Groza.

That’s all of our recommendations for the best Groza loadouts in Cold War. This is a really useful weapon that can help you get ahead in the latest season of Cold War. Our other guides to the game can help you improve in other areas too.