How to Get Better at Sniping in Fortnite

Sniping in Fortnite is a specific skill. There are plenty of people who excel at it, but quite a lot who have never learned. As a versatile game, Fortnite demands you to be competent in most forms of combat if you want to have a chance of succeeding competitively. This means that even if you’re not great at sniping, you should be trying to get better.

By following some tips and practicing quite a bit, you can get better at sniping. With enough work, you’ll be sniping at long range and taking out opponents without ever putting yourself in danger. Getting better at sniping can seriously increase your chances of getting that Battle Royale. If you’re good at close combat but struggle from a distance, or just can’t fight at all, getting better at sniping will give you more options to survive for longer in Fortnite.

Don’t be afraid of dying in Fortnite. This is the main thing to keep in mind when trying to improve any aspect of your play. Dying in a Battle Royale is a great experience. Spend some time practicing sniping and don’t be afraid of dying relatively early. You should spend more of your time trying to find situations to practice sniping, rather than specifically trying to win. When you die, you should pay attention to how you died, and if that has something to do with the way you were sniping. You can then adapt to this failure, and use it to do better in the future.

Don’t dither over making the shot. If you’re far away and you’re trying to line up your shot, take the shot. Many times players hesitate about taking a shot for far too long. Worrying that this isn’t the exact right second. You should take more shots with the sniper rifle. There are few downsides to missing but hitting can at least damage the opponent. Taking more shots will help you improve your aim faster than trying to perfectly line-up your shots. You’re aiming for quick muscle memory while sniping, not an exact shot every time.

After reloading from a shot, switch to a shotgun in case you gave your position away. Missing long-shots shouldn’t be a worry, if you hit someone it will work.

Bullet Drop is a term for the curve of bullets in Fortnite. When your target is at a distance, your shots will gradually fall through the air as they travel. You need to adjust for this, which can be a little complicated at first.

When aiming with a scope, you may notice that there are a number of horizontal lines coming from the bottom of your crosshairs. These lines indicate 125 meters. If you’re target lines up with the first, they are 125 meters away and you should be using that line as the crosshair to account for bullet drop.

The first three of these lines are the only ones you will have to use. The marks below are so far away that you usually can’t even see where your shot will land, it’s too far away to even render. You don’t normally have time to measure the distance. However, with practice, you will eventually get better at judging which target is however far away and using the appropriate line. This quick tip can have you hitting your target much more often, with a lot of practice it will become second nature. 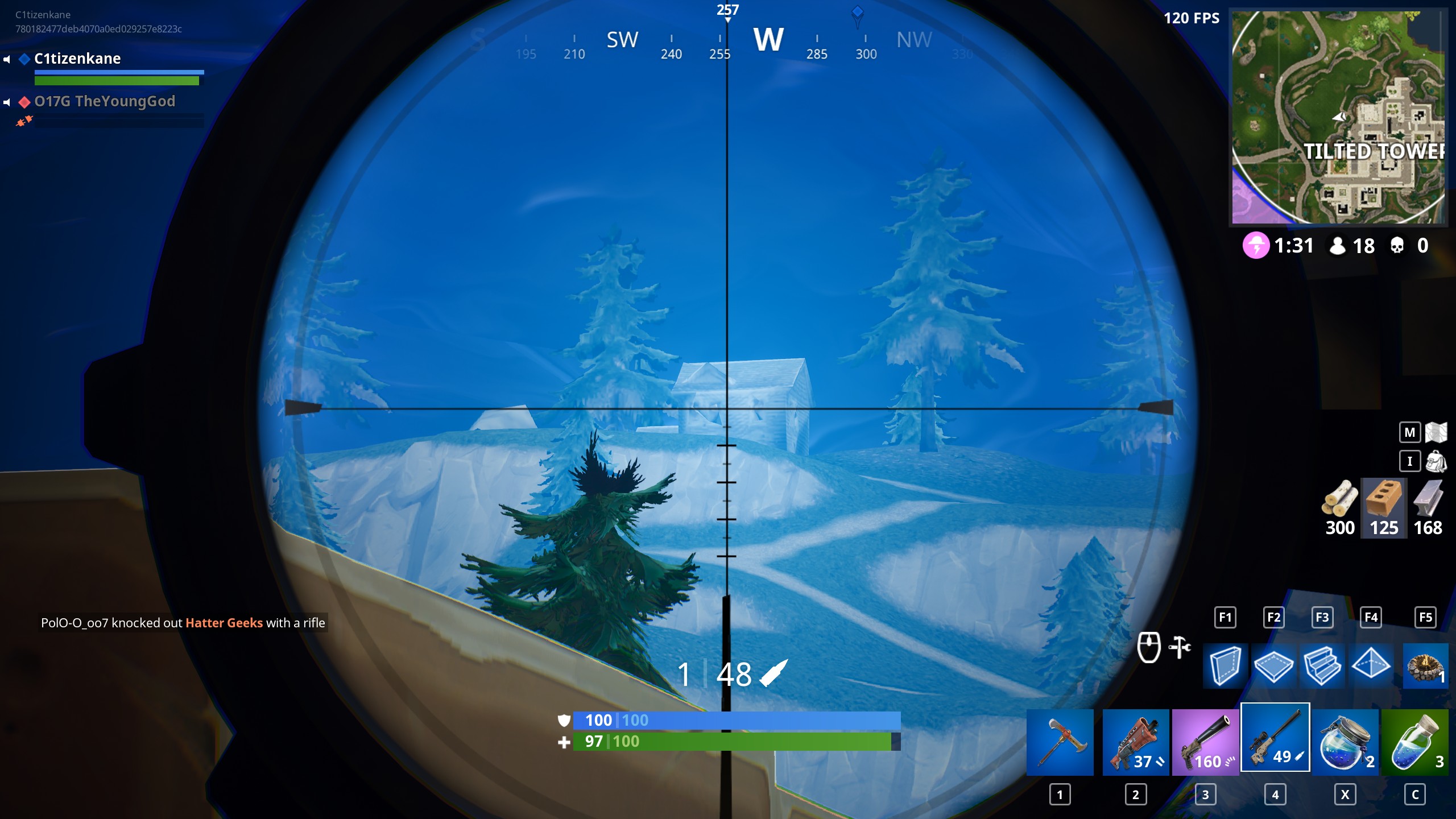 Unlike sniping at a distance, there is no trick to hitting a moving target. This one is all about practice. When shooting at a moving target, move your crosshair to where you estimate they will reach by the time you shoot. You will hit or miss. Just keep taking these shots. Remember if they are further away, you have to aim further away from them to account for quicker movement and the time your bullet takes to travel. There is no trick to hitting the target every time, as you make more estimated shots you will get a better feel for what hits and what doesn’t. Calculating where to shoot will become second nature.

There aren’t any easy answers for getting better at sniping, aside from the crosshairs. However, with some dedication and practice, you can make serious progress. Concentrate on practicing lining up your shot fast when playing. View every spotted player as an opportunity to practice getting your shot right, rather than a step towards a Battle Royale. Take every shot to maximize your practice time. The more shots you take, the quicker you’ll stop missing and get better at sniping.

What do you think? Are you a sniping expert? Share your tips below.