PUBG is a combat heavy game. Mastering Firefights and improving your aim are two of the most important things you can do to win more games. However, proper strategy at a distance and medium-range doesn’t help in close combat in PUBG. Most of the focus on fighting in PUBG covers those long and medium length fights. These are more common and the ones that are easier to control. Close combat in PUBG can be a real blind spot for players. There are some moves you can do and tips to keep in mind if you want to get better at dealing with other players up close and personal.

Practicing close combat in PUBG can be difficult since these situations are hard to seek out. After spending ages sourcing good weapons and landing in the perfect spot on the map, it might feel like a waste to then die attempting to get into a close combat situation for the sake of practice. You might have to be willing to waste some time and games learning and practicing or practice these mechanics in a similar shooter with a faster pace, you would have to make sure your sensitivity and controls matched perfectly though.

The first step to mastering close combat in PUBG is having the right loadout of weapons. You need a weapon that is effective at close range. Shotguns are always a good choice, but if you miss you might struggle to recover. You can work at improving your aim, but you might waste your one chance to salvage the time you’ve put into looting. Other weapons like pistols can also be helpful. You should at least make sure you have a designated weapon for these encounters, or you won’t be properly prepared. 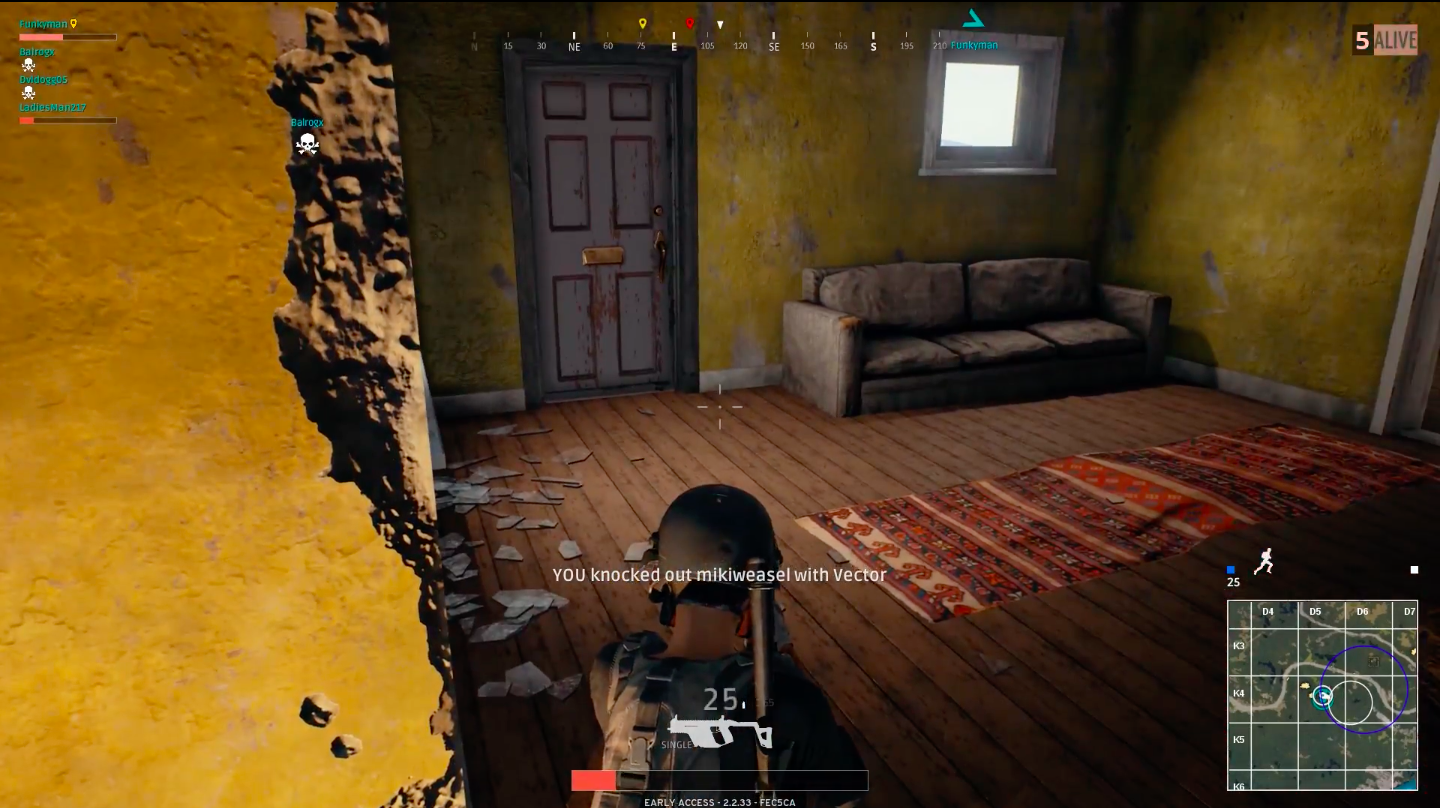 Close combat in PUBG doesn’t have to be two players stood like statues blasting away until one is dead. This isn’t a duel and you don’t owe anyone a fair fight, use movement. While you want to avoid complicating your own shot too much, you need to make it as difficult as possible for your enemy to hit you. The first step is to use the area around you. You might not have time to duck behind cover or the space to make that effective, but you can make the most of the building that you’re inside.

Close combat in PUBG mainly takes place in buildings. Weave around these builds. If you’re closer to the door, leave through that door. Come back in a different way or fire through the window. Use any movement that you physically can to throw off your opponent. This might seem like a random tactic, but it does work. Your enemy will lose track of your position and it will allow you to take the element of surprise. You can keep track of the other player by paying close attention to sound. Sound is positional and you should be using it to spot where an enemy is. They will be making noise in an enclosed close combat situation in PUBG.

This obviously won’t apply to close combat out in the open air. However, this shouldn’t even come up. You should very rarely actually find yourself in close combat outside of a building. Before you expose yourself in the open air, you should be taking stock of the situation to take out potential enemies. Close combat in PUBG is only really relevant in semi-enclosed spaces. If you’re finding yourself getting into scrapes in the middle of maps, you should consider how you’re moving around. 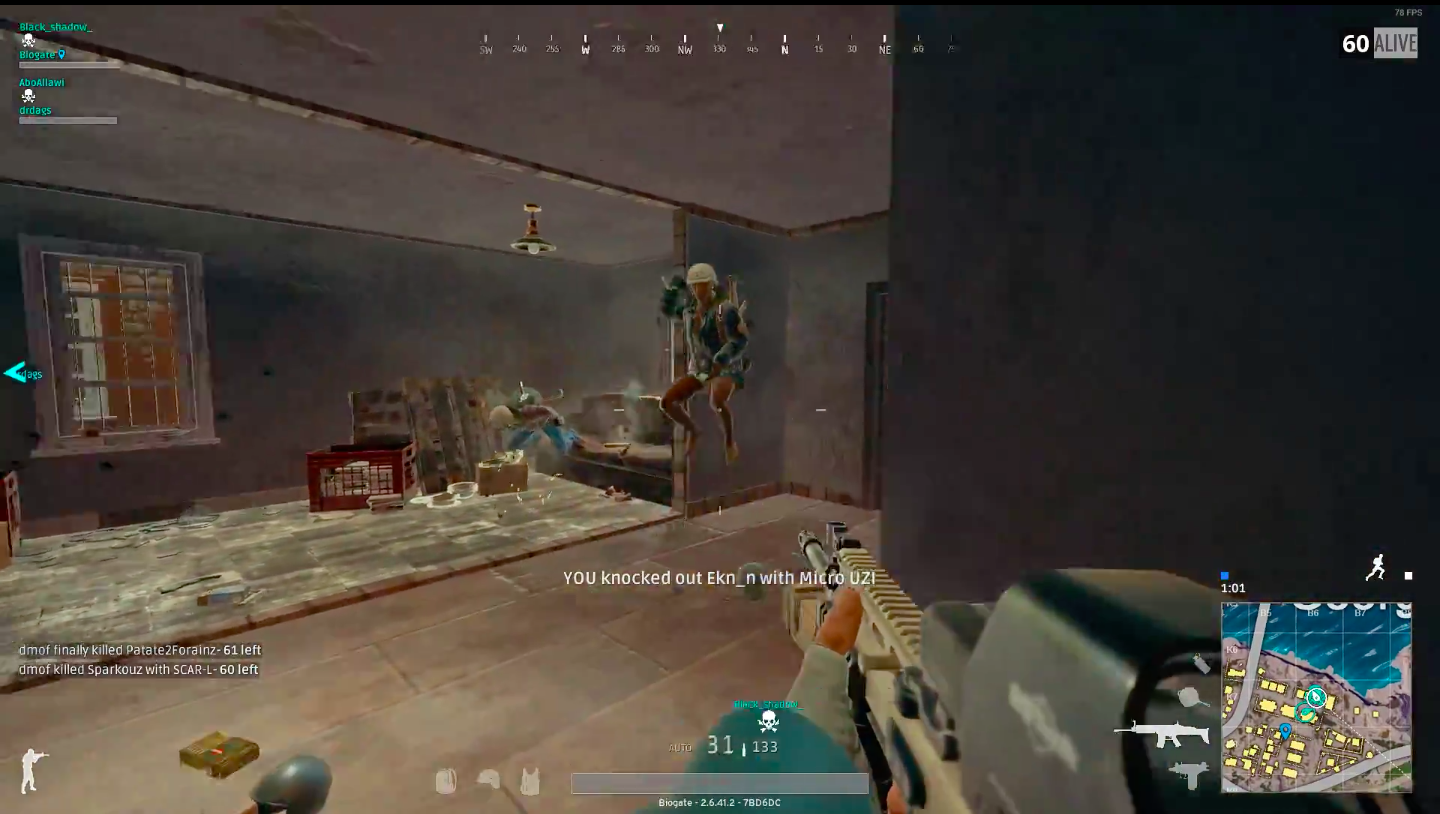 You may have seen other players performing aerial dances in an attempt to make themselves hard to hit during close combat in PUBG. Those players have done anything possible to avoid being an easy target. Much like in Fortnite, jumping is a reliable way of throwing off your opponent’s aim. This isn’t the best way to dodge though. Jumping will still let you be vulnerable and predictable. Instead, you should strafe, crouch, crawl, and jump. Your success in dodging the shots of other players is dependent on them being unable to predict your movements. Keeping it random and messy will help with this.

Since you’re moving around so much, aiming will become a problem. While you’re harder to hit, so is the other player. There are some steps you can take to keep your aim straight. The first is to use the right weapons. Some weapons are completely unsuited for close combat in PUBG. Pistols and shotguns are your best friends in these situations. You should try and you a shotgun as these weapons have the least negative effects from firing from the hip.

Firing from the hip instead of aiming down the sights while making you lose accuracy, but it will significantly improve the time you take to shoot. This is more important in close combat. Your enemy will be close enough that the loss of accuracy isn’t much of a problem. Instead, speed is the only thing you need. Shoot from the hip, do it fast, and make yourself hard to spot.

Mastering close combat in PUBG occasionally involves playing a little dirty. These situations won’t happen all that often if you’re a careful player, but you need to master these techniques so you are ready and prepared for an ambush or a chance encounter.