Season 8 weekly challenges are out and easy battle-star tiers are up for grabs. In this season, the battle pass owners have many skins to unlock and a majority of these skins have additional outfits. Users have been aggressive in finishing up their challenges to be the first ones to claim these outfits without having to buy extra tiers.

For the first time, a pet is available in the item store for purchase. If you had plans to save up the v-bucks you’ve earned from the challenges for an outfit, you might want to re-think your options. The addition of pets (as back-bling) adds a new exciting option to spend your hard earned v-bucks. Priced at 1000 v-bucks, the Empress is a cat with loads of new custom pet animations.

The new Empress Pet joins the Animal Jackets Gear in the Item Shop! And don't forget to pick up the Getaway Gang Gear before it rotates out of the shop. ♥️ pic.twitter.com/j1lEiEgGLA 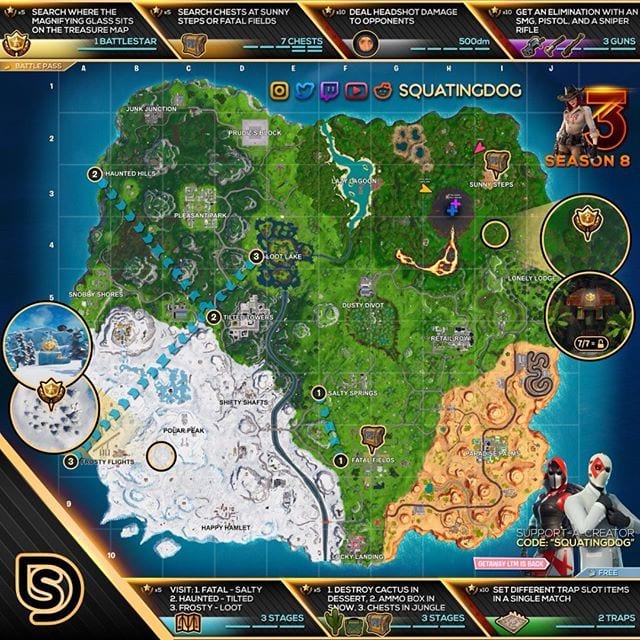 Thanks to twitter user @Squattingdog,  the above picture has almost every piece of information required to complete week 3 challenges.

Battle Pass owners have an extra set of challenges available to them.

Disco-Domination is now available in the playlist replacing team rumble. This LTM is better than team-rumble to complete challenges as you get upto 30 opponents on the other team as opposed to 20 in team rumble. The more opponents, the easier the elimination challenges become for any player.

Data miners had previously uncovered a leak which suggested a promotional campaign for Vivox offering a free skin. Vivox is a text and voice service that is run by Epic and it’s the only way for Nintendo switch users to enable voice chat in the game.

This leak was spotted back in February. Recently, viewers have confirmed that “Carbon Commando” is the skin that is going to available to Vivox users.  Promotional offers are ideally free. In this case, users might be required to download and install an app.

Tons of unreleased skins were used in the ESL Katowice Royale 2019 and slowly data-miners are getting more information about each skin. Hopefully, we’ll get to know more about each skin upon further patch/update releases.

Now that week 3 challenges are out, which ones are the toughest this week? Which is your favorite unreleased skins so far? What do you think about the new “Empress” pet?