If you’ve been with Apex legends since its launch (and if the way player numbers have dropped off are any indication, then you probably have been) then you likely remember that stats tracking was locked behind a paywall. Yeah, the game was cheap enough to demand that you buy you the ability to check your stats, even then you had to grind your level up to see anything. Things are a little better with Season 2. The stats tracker is no longer locked up, but it is still subpar. At any one time, you can only check the stats for one legend. This is why so many people still use Apex Legends stats trackers.

With an external Apex Legends stats tracker, you can keep track of your lifetime career stats, both for each individual legends and overall. This is much more expansive than the data offered by Respawn. You can also use it to look up the stats of your favorite streamers or pro players. If you feel like settling a score over who is the better Wraith you can even check the stats of your friends. With so many different Apex Legends stats trackers around, which is the best one to use? 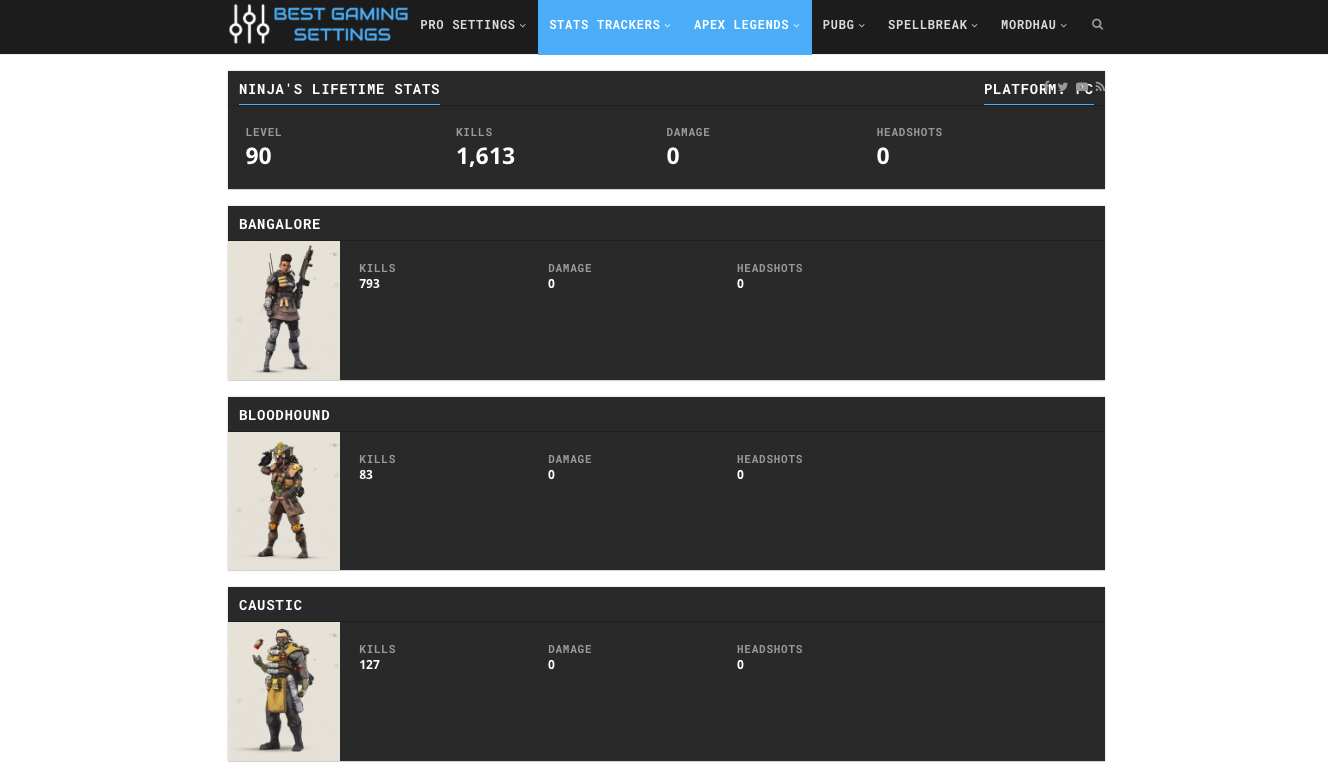 Once you’ve found your own profile, or anyone else’s, you have access to all of your stats in one place. You can view breakdowns for individual legends, but without all that extra work of switching around your in-game pick. It isn’t just the in-game stats tracker that forces you through these hoops, some online trackers have these imitations too.

You get your total kill numbers divided up between legends. If you typically stick to one or two legends this might be quite predictable. However, there is always the chance that you’re actually much better playing as a Legend you don’t normally go for. Keeping an eye on your reports with this Apex Legends stats tracker can help you stay aware of your performance with every legend. 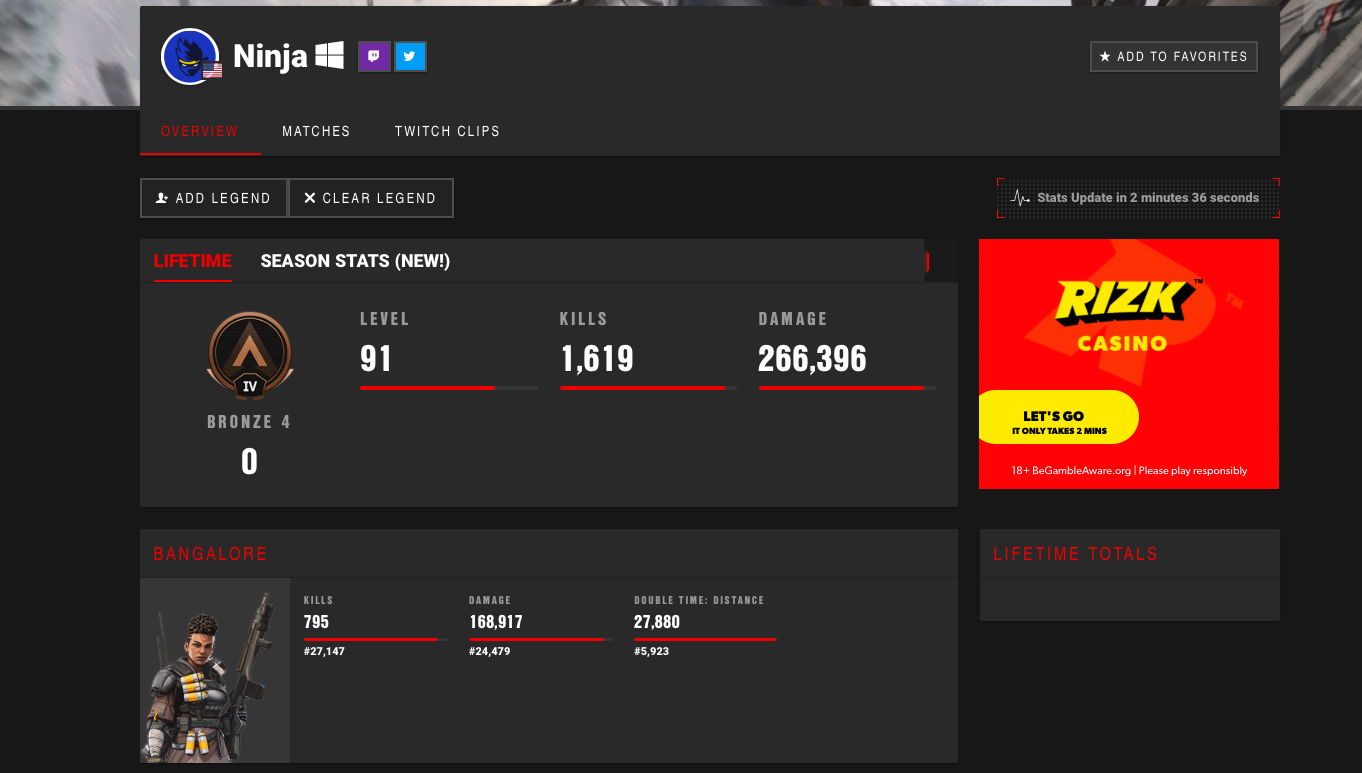 The Trader Network Apex Legends Stats tracker is a pretty popular one. It feels very polished but it is actually lacking some key features.

While the information on player levels and links to streamers social media accounts are nice, it isn’t as friendly towards tracking your own stats. For quite a few normal players, you can’t see your stats for every legend without changing things around in the game itself. Since this tracker can’t manage to do more than the in-game tracker for a lot of players, it isn’t really worth using to track your own stats.

This Apex Legends stats tracker is from the same people who run a popular Rainbow Six stats tracker. It functions pretty well for looking up major players and your own stats. Its major issue though is the same as Tracker Network. To view your accurate stats for each character, you have to switch things around in-game. At that point, shouldn’t you just use the in-game tracker? It also can’t figure out your platform by itself.

As long as you keep the tap open this tracker will keep itself updated which is a nice feature. It also works out your main pretty well which is a bonus, but not exactly something most players don’t already know. This is a nice functional tracker but the need to change out your legend in-game makes it a bit of a hassle. 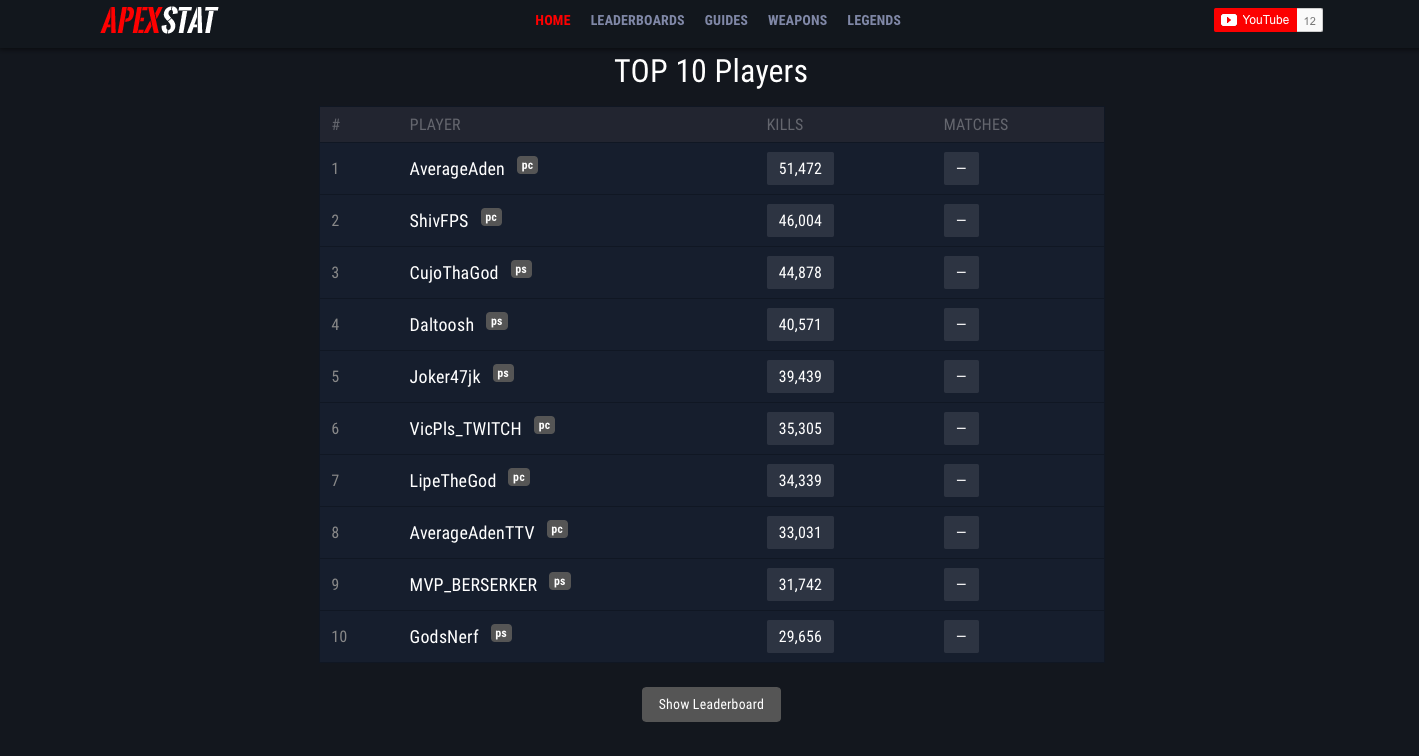 Apex Stat is a dedicated site that functions as nothing other than an Apex Legends Stats Tracker.  It lets you look up some detailed statistics for every player which is cool. You do have to specify the platform but it manages to find most players. It also offers some leader boards for who has hit the highest level or kills. Helpful, if you want to try and break those records.

This is a good site for leaderboards. However, since the introduction of Ranked mode in Season 2 they are a little outdated with all the changes. If you’re really after a competition about who gets the most kills, then this is a good enough stats tracker.