Apex Legends features quite a few different characters with plenty of rare skins spread between them. However, as with every hero shooter, not every Legend is going to be relevant to you. Most players tend to gravitate towards a single Hero that they’re particularly skilled with, hence the term ‘main’. Even if you have a sub or two that you occasionally use, when you’re looking for the rarest skins you’re really after the rarest skins for the legend that you play. If you gravitate towards Bloodhound for his tracking abilities, you’ll find plenty of cool skins. Some of the rarest Bloodhound skins are also quite visually impressive. Every Bloodhound skin brings something new to the character, but most players want to know just how rare their Bloodhound outfit is.

This is a comprehensive guide to every Bloodhound skin, divided by their rarity! Some of them are so rare that you might not have even seen them in a game. If you want to stand out while playing as Bloodhound, then some of the really rare skins in this list will do just that.

Bloodhound is a pretty interesting looking character. However, these skins don’t do a whole lot to improve upon or change that. They are essentially just different bloodhound colors. 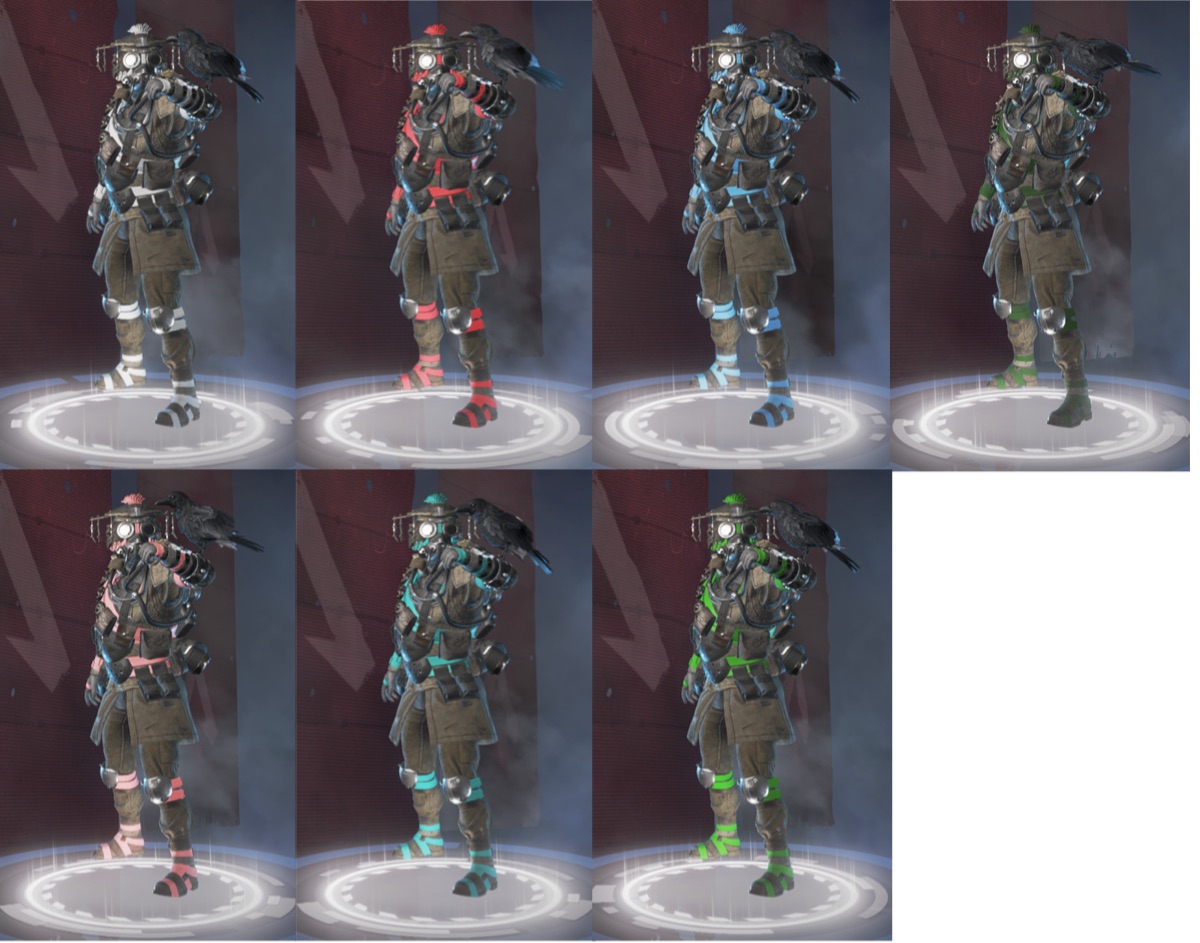 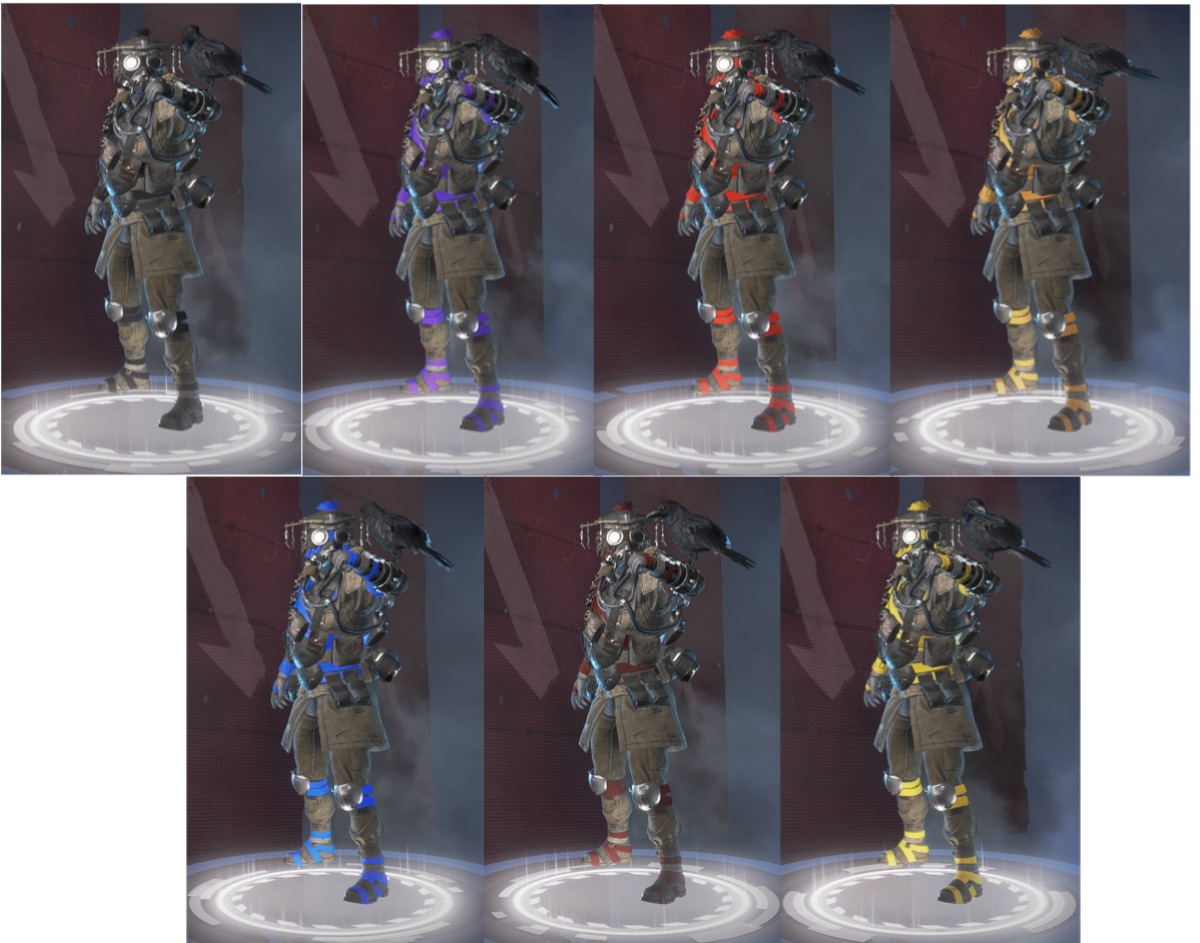 These are Midnight, Orchid, Rage, Sahara, Skyward, Vino, and Yellowjacket.

Yeah. They’re all alt-colors. These skins aren’t really the ones you aspire to get. These aren’t the rarest Bloodhound skins. In fact, out of every bloodhound skin, these are probably the least interesting. However, they’ll only set you back 30 crafting materials, so it is hard to complain at that.

Now we’re getting somewhere! These skins literally have Rare in the name, they are rare skins. So surely they’re the rarest Bloodhound skins?

Well, no not really. These are marginally rarer than the common skins but not all that much. Just like the common skins, they also don’t change a crazy amount. The Rare label is just what Apex Legend’s uses to divide the skins. These are a little better than the rare skins available for other characters like Bangalore or Wraith. Bloodhound’s mask and big coat lend themselves a lot better in showing off the patterns from these skins. 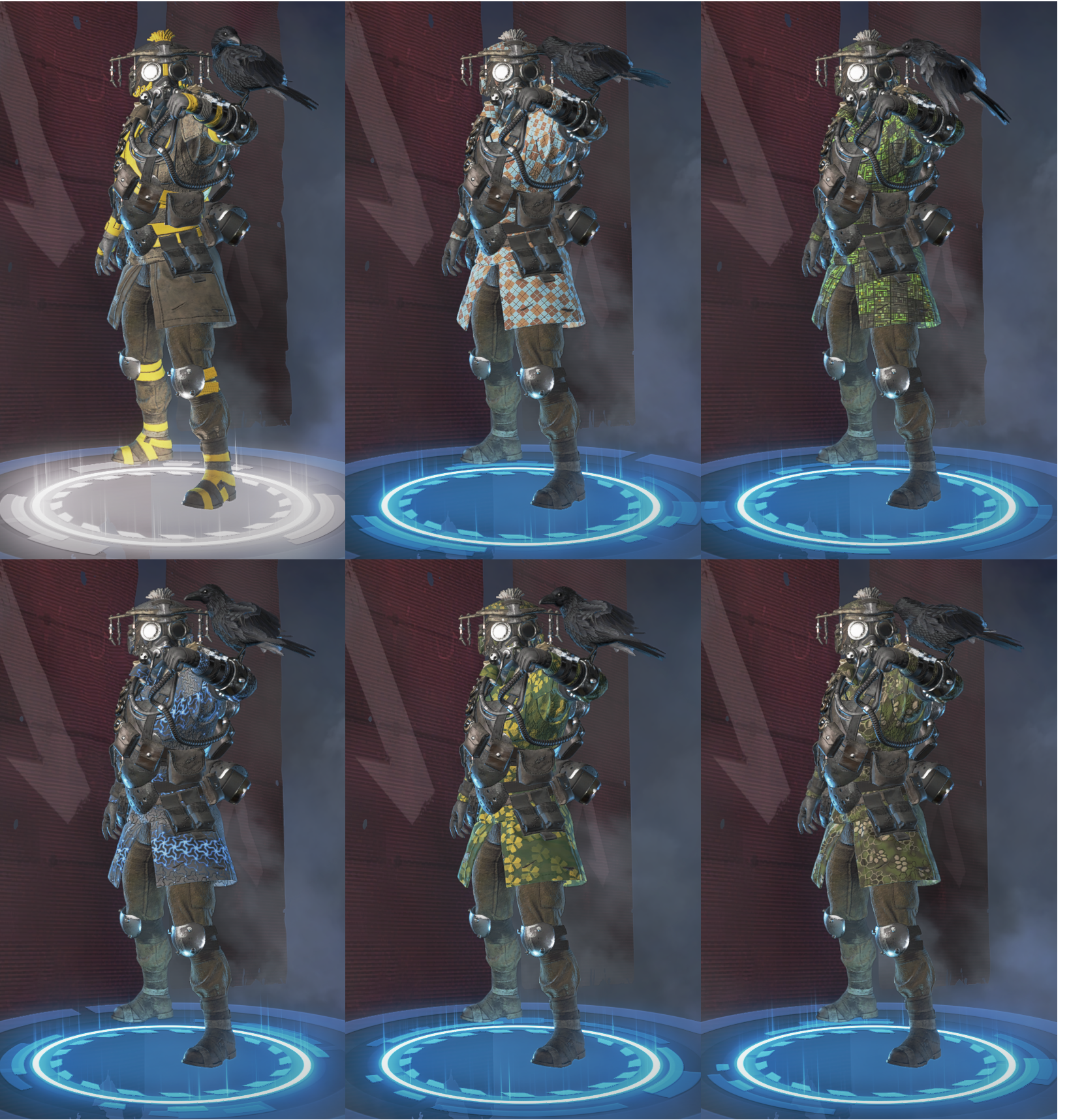 These are Bloodline, Checkered Past, Green Screen, Life Cycle, Lucky Charm, and Scales of Justice. 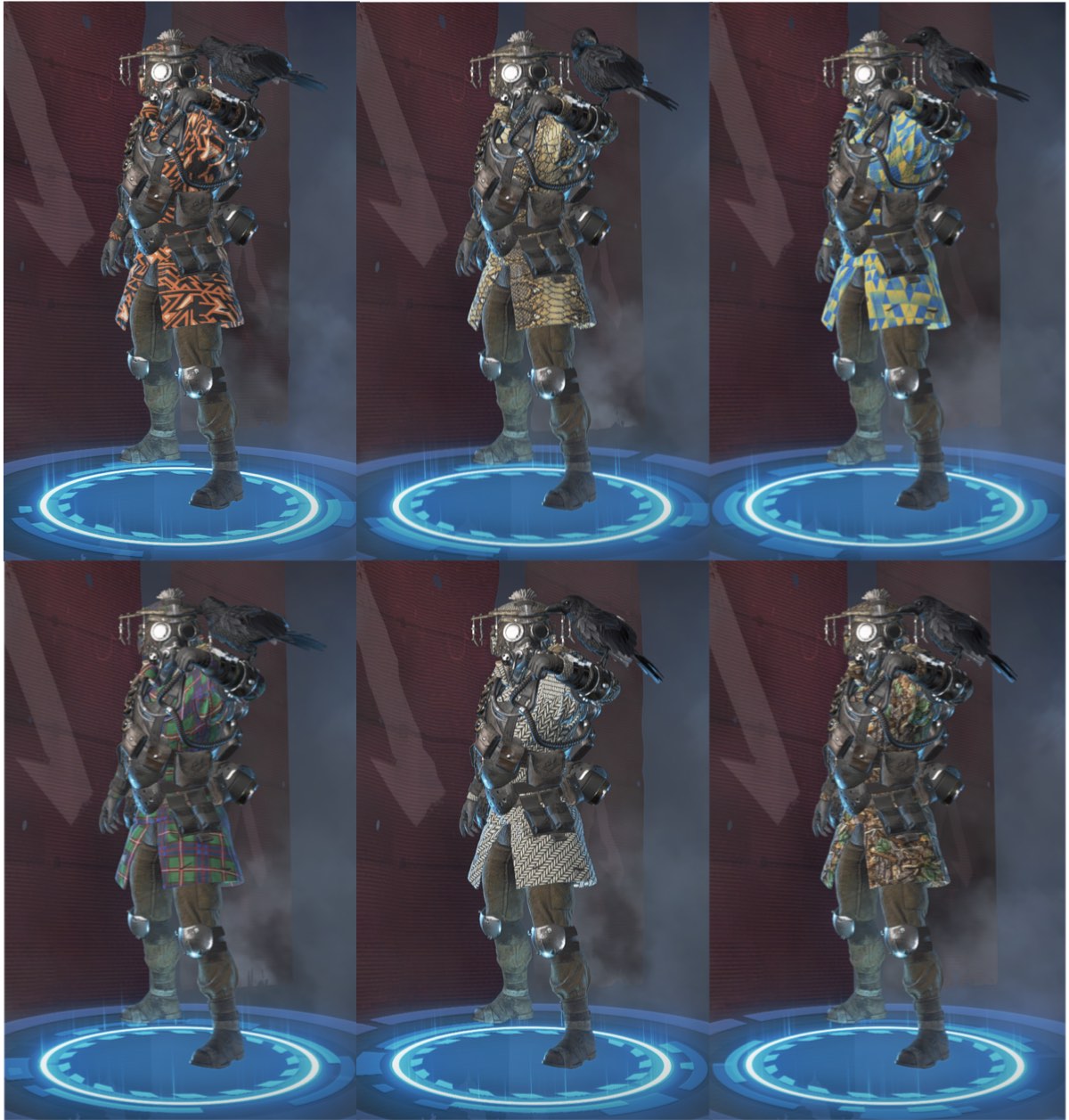 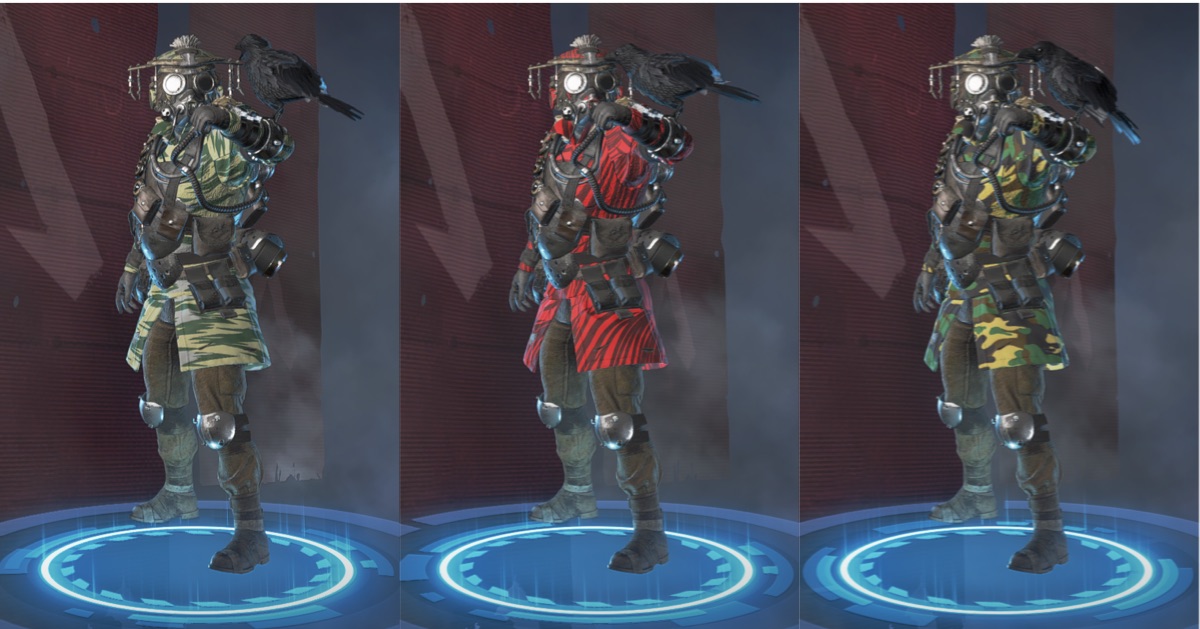 These are Tropic Streak, Warlord, and Woodland Warfare.

These each cost only 60 crafting materials. This is double the price of the common Bloodhound outfits but still not a crazy amount in terms of the in-game currency. Out of every Bloodhound skin, these at least offer you something in return for your materials. However, these aren’t the rarest Bloodhound skins.

However, Apex Legend does offer some actually rarer bloodhound skins in the rare classification. 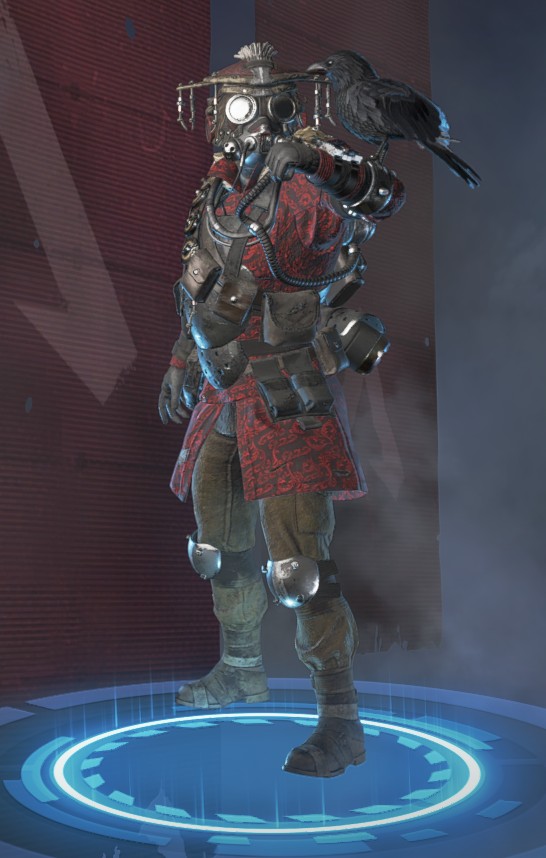 This one was exclusive to the founder’s Pack, a bundle of in-game currency and cosmetics. This is the type of skin that should have become one of the rarest Bloodhound skins. Except it hasn’t. You can still purchase a code for the founder’s pack pretty easily, making this marginally rarer than the others but not by much. 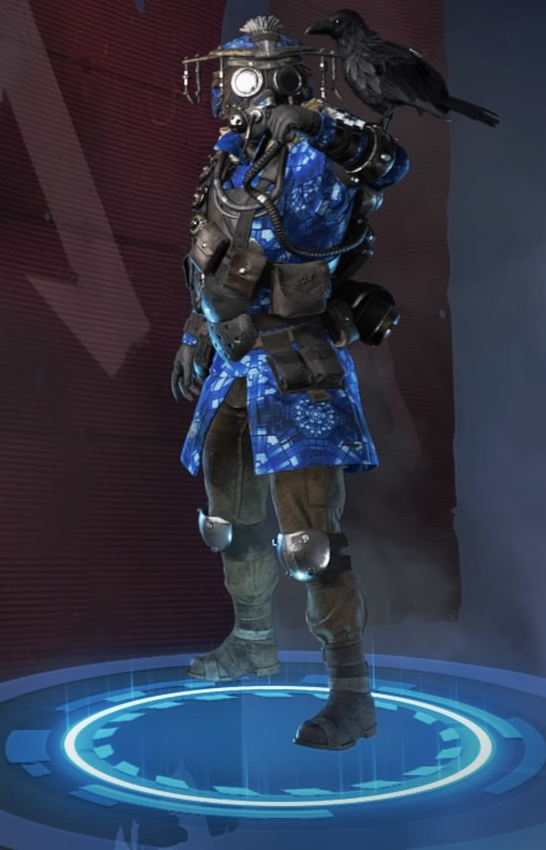 This is yet another skin that was given out for PSPlus customers! It features an all-Blue PS4 style look. Since not every PS4 player even has PSPlus, this isn’t the most common Bloodhound skin that you’ll see. 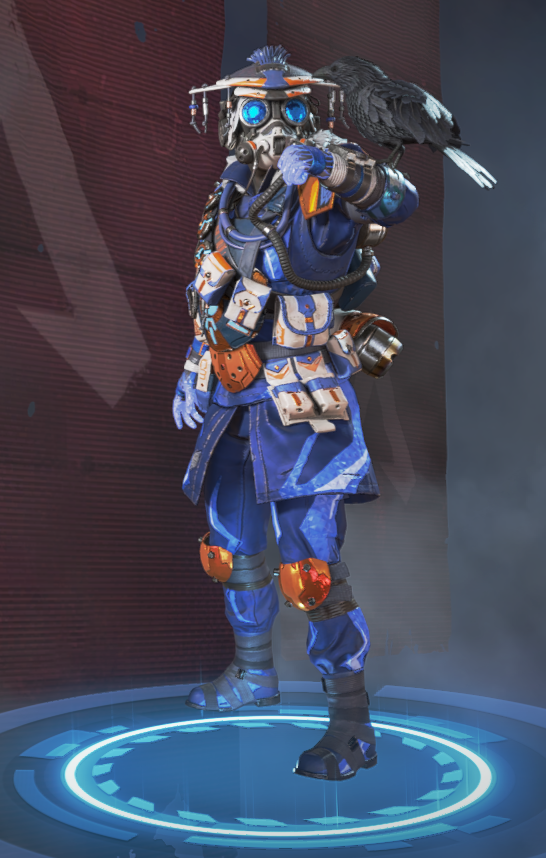 This is the initially unlocked skin with the Season 3 Battle Pass. It is a nicer looking skin that most other Rare ones, but one you’ll likely see a lot of.

Epic – Some of The Rarest Bloodhound Skins

These skins begin to get a lot more interesting than the others. While the first few are still variations on a block color for bloodhound, some of them really do look quite different. These aren’t the rarest Bloodhound skins, but they’re approaching that. If you have one of these, you’ll likely turn a few heads. 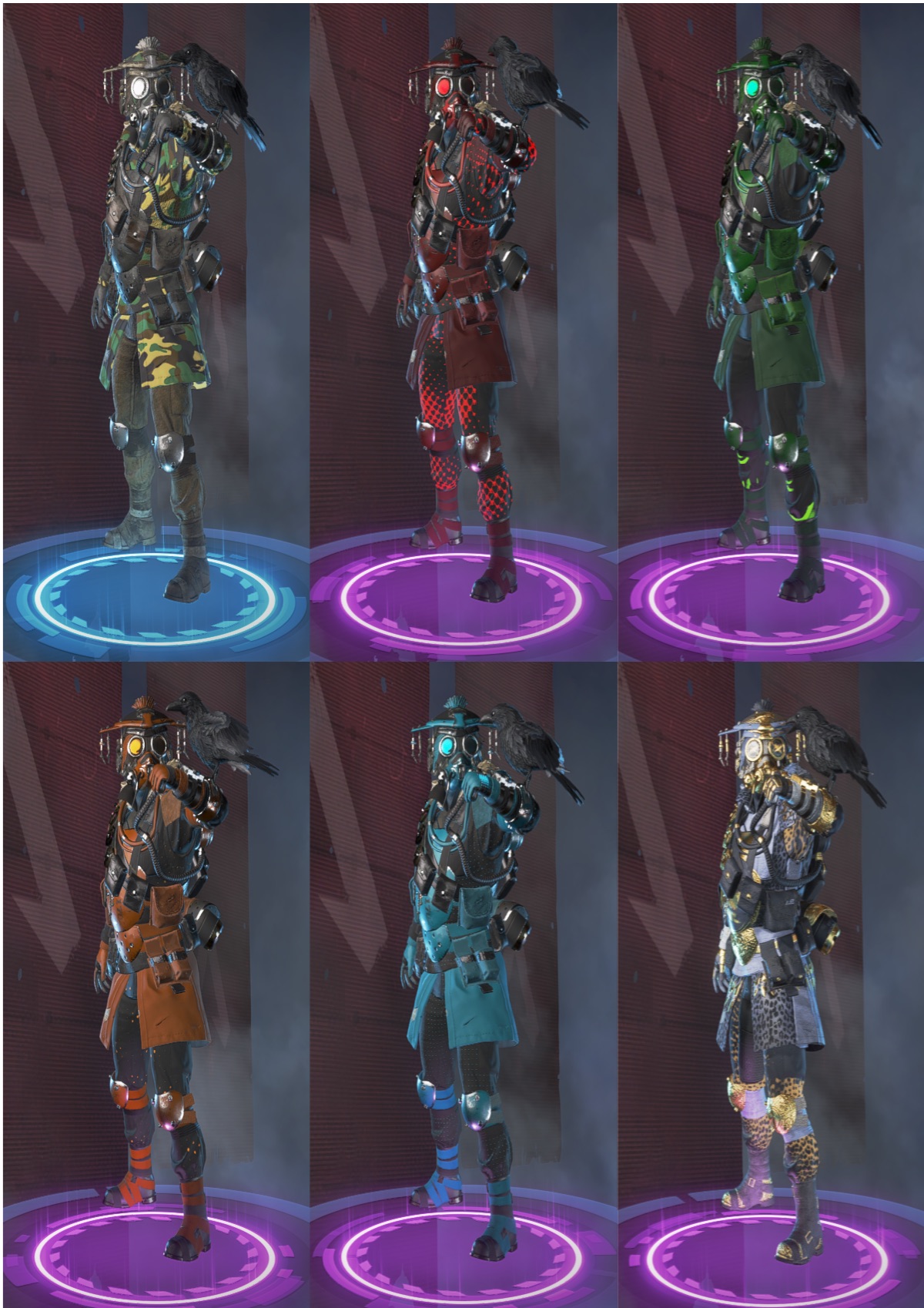 These are Fiber Optics, Glowing Viral, Hack the System, Heat Sync, and Neural Net. The final image is Master of the Hunt. This skin was exclusive to the Legendary Hunt. This has made it quite a bit rarer recently, especially since this was a while ago. While it isn’t too uncommon at the moment, it is likely to become a bit rarer in the future, this is one worth holding on to. 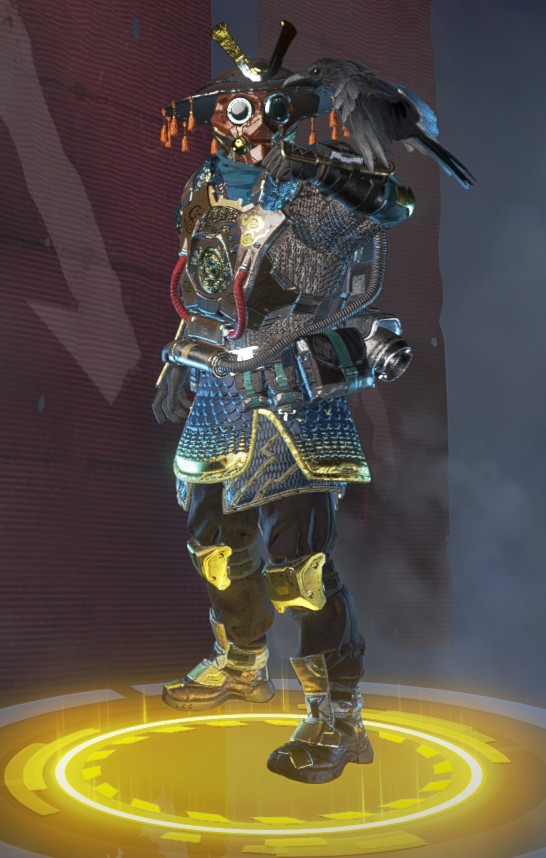 This one is a samurai-style skin with a few different colors at work. While it can initially seem quite similar to the standard look, that one goes for smaller details than an overall recolor. It is one of the nicer Bloodhound skins that still looks quite similar to the original.

Like the other legendary skins, this one is available for 1,200 crafting materials. It is largely red which really brings out the Samurai look of Bloodhound. This is a cool skin but not as distinctive as some of the other rarest Bloodhound skins. 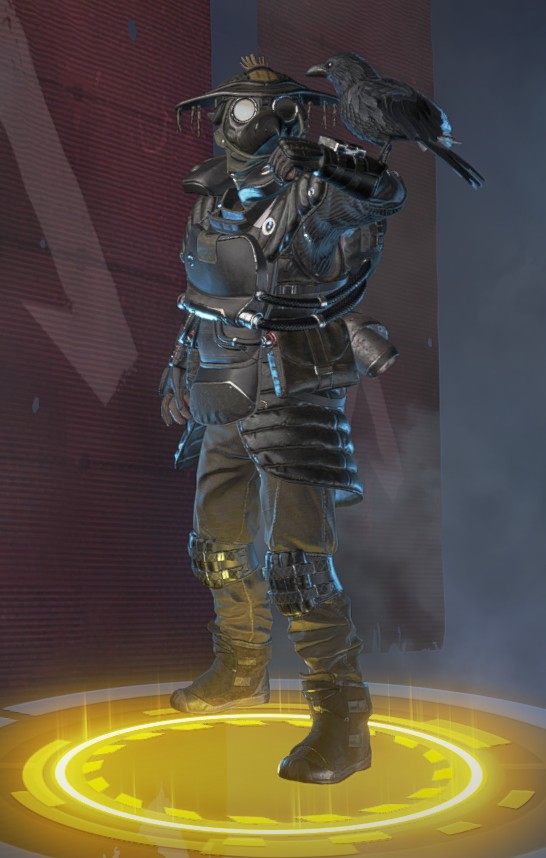 This skin sells for 1,200 crafting materials and its inspiration is pretty clear. It is made to look like the French Plague Doctors that briefly existed and have become a Halloween favorite in recent years. This one is very dark and should actually help with stealth. 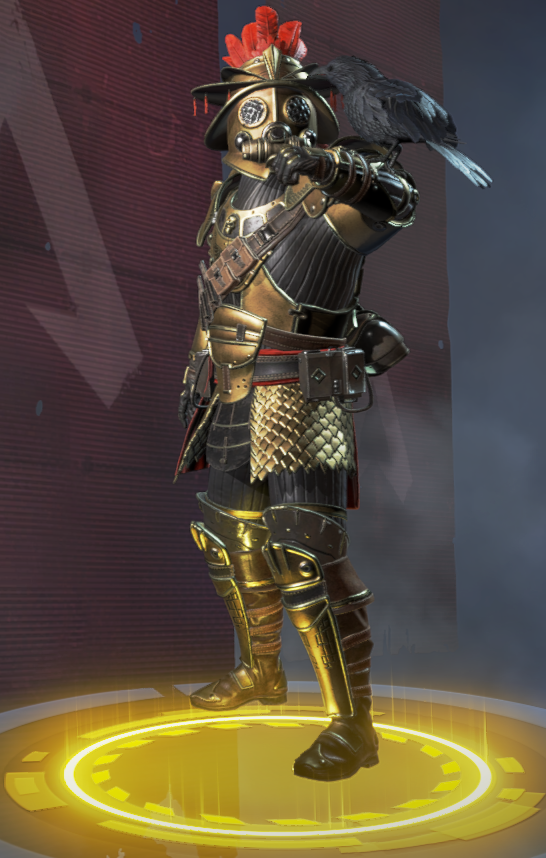 Keep of the runes, this is apparently one of bloodhound’s many responsibilities in this skin. It is orange all over but actually looks pretty different. A few small changes manage to make Bloodhound like more he’s wearing robes than his usual clothes. 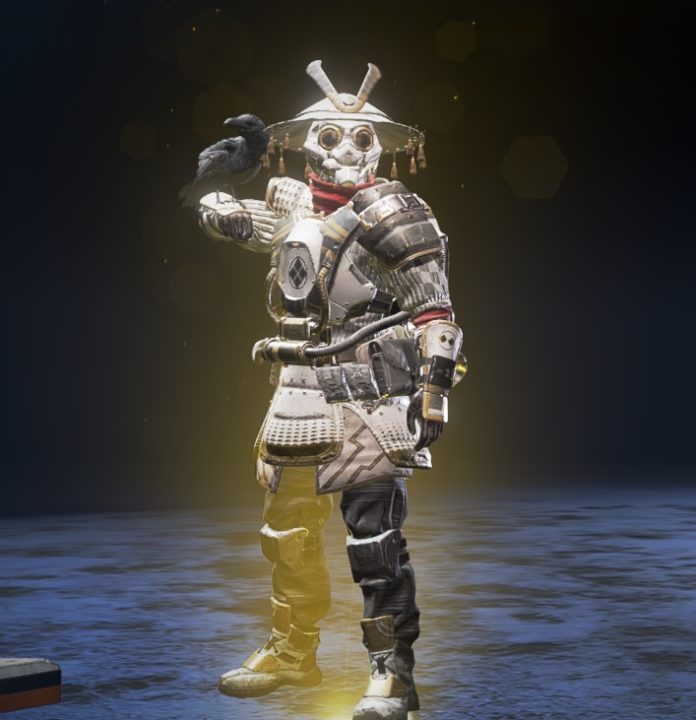 This skin would have cost you 10,500 Legend Tokens and you needed to have already gotten the Imperial Warrior. This one is essentially Imperial warrior, except he’s in entirely white this time around. This isn’t going to help you to blend in, but it is something new.

This is one of the rarest Bloodhound skins and for good reason. He’s decked out almost entirely like a Roman soldier or a knight. This is definitely one of the coolest skins. It was only available in the Iron crown event, so was pretty hard to actually unlock.

Protector of the Patch 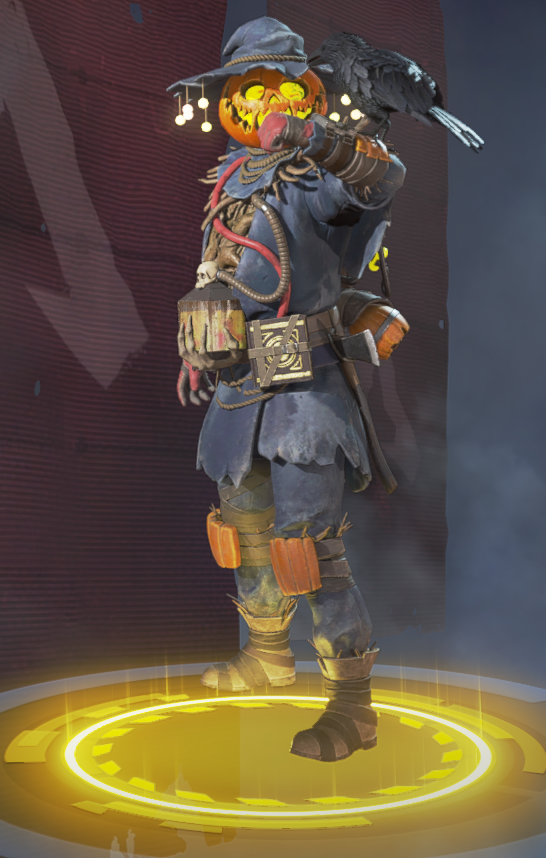 This is a Halloween themed skin, he is set out as a cross between a Scarecrow and the Pumpkin King It is a really cool look and one sure to surprise any player that comes across it. Like with some of the other rarest Bloodhound skins this one was only available through a special event, Fright or Fight. 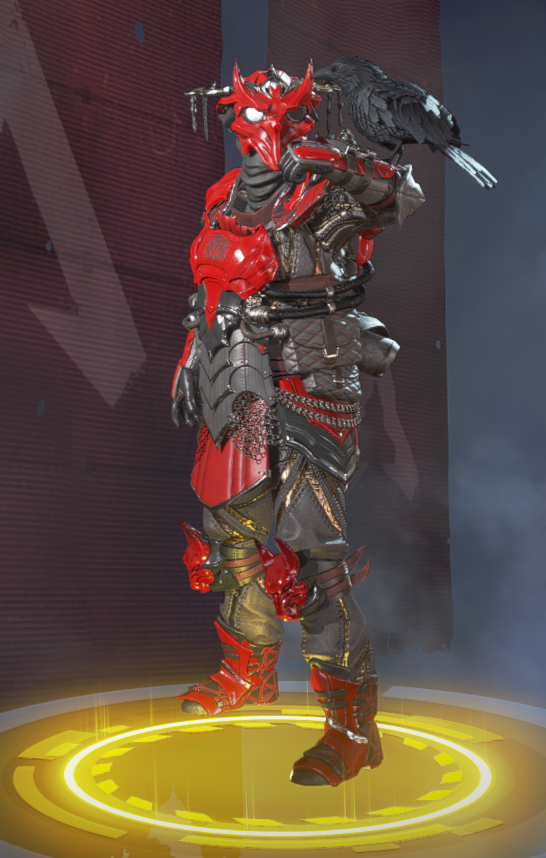 Bright red and armor instead of padding, this is a pretty cool skin. It has a strange look to it and the colors aren’t going to help you blend into your surroundings when you’re playing, especially not with the Halloween event currently going on. 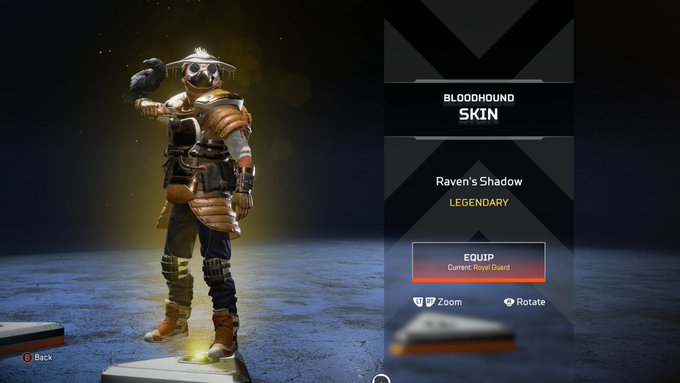 This one required you to have already acquired the Plague Doctor skin, a rare skin in of itself. It also needs 10500 crafting materials, so this one was pretty hard to actually find. It is a relatively different skin that keeps a fair amount of the Plague Doctor aesthetic going. This is one of the rarest Bloodhound skins because of this unique aesthetic and the difficulty in obtaining it.

Bro you forgot two, the skins around the time the bloodhound trials came out. Young blood and my personal favorite the Wise Warrior skin BC huh r