Apex Legend’s second season is proving to be a lot busier than the first. Fresh of the heels of the controversial Iron Crown event, a new limited-time event is beginning in King’s Canyon. This time the event will focus on the Legend Wraith. In a game that seems to push new Legends at the expense of the old ones, it’s nice to have some focus back on the original members. Voidwalker gives you the chance to fulfill some challenges to earn in-game rewards, like skins and some other bonuses. The limited-time mode might be as fun of an addition as the Solos mode, but it is a nice distraction.

Voidwalker began on September 3rd. The Voidwalker event is going to end two weeks after this, on September 17th. The rewards for this event are considerably fairer than those in the Iron Crown event. There isn’t the same predatory mechanics to get money from players, but the best stuff is still behind a paywall.

There are only two tiers of challenges for Voidwalker, completing both of them will let you get all the rewards that you can.

There are also a number of skins available during the event. These are timed and exclusive to the Voidwalker event. However, you will have to pay some hard-earned money if you want to get any of these. 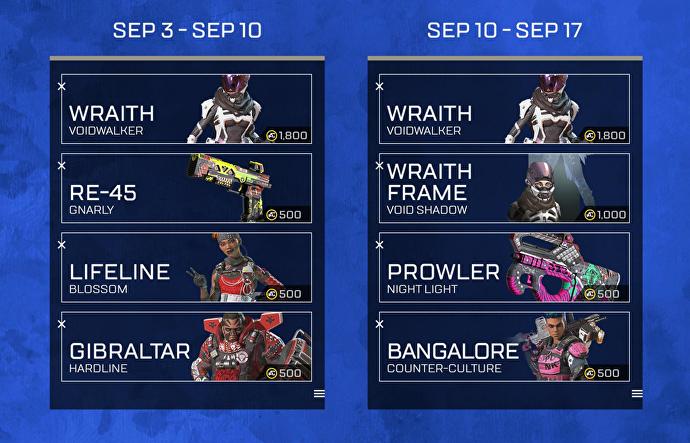 What Else is in the Voidwalker Event?

The Voidwalker event is a bit more than just those challenges though. This is everything else that is going on during the event:

If you want to make sure you can get all of those rewards, you need to have good aim and know how to win matches. This will be easier if you’re using the best settings for Apex Legends and getting the best frames per second possible.