Are 200 Player Lobbies Coming to Fortnite?

Fortnite Chapter 2 is winding to a close, even if that winding down is taking longer than some would like. But with a new season approaching its time for players to endlessly speculate about what is coming next. Over the course of the Blackhole event, we saw quite a bit about the next season leaked out by top players who had been informed in advance of what was coming. It seems that may have happened again, albeit inadvertently. A lot of players are currently obsessing over a message they spotted on Tfue’s stream this week, one that might show 200 player Fortnite lobbies are coming.
Epic does use top tier players to test things out or let them know of incoming changes. This is just part of their cooperation with the community, which has now even extended to making skins out of popular content creators. However, being included in this information usually comes at the price of the player keeping quiet about things. This latest development hasn’t happened because of a leak, but apparently a complete accident involving leaving another tab open when streaming.
Tfue’s messages seem to show that 200 player Fortnite lobbies are either coming soon or being used to test out new features privately. This is a big development. A 200 player lobby would likely need some map changes to accommodate it. This could even point towards the game having bigger maps and player counts for certain game modes, like PUBG’s newest addition.

The leak in question occurred on Tfue’s stream. In the opening few seconds of the broadcast, Tfue was clearing his screen as many streamers do to focus on the game. Discord was open, again nothing unusual here. What was strange was what he was reading on Discord. It was a message from the player Scoped, forwarding a message from Epic. 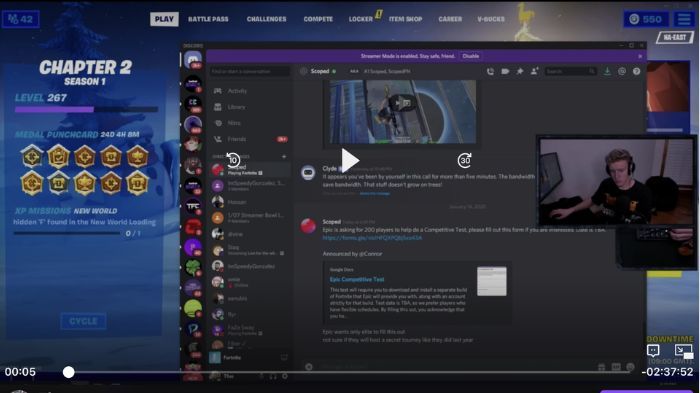 Fans isolated this screenshot and zoomed in to try and figure things out. They found a link to a Google Docs file, apparently asking players and streamers that had been selected to register. Those selected would take part in a competitive test for the 200 player Fortnite lobbies. This link was then exposed to the public, and plenty of people double-checked that it was legit.
The link was quickly taken down. However, it is clear that this form itself existed and was sent to Tfue over Discord.

Are 200 Player Fortnite Lobbies in the Works?

While 200 Player Fortnite Lobbies are exciting, all we know for certain is that Tfue received a link to a Google doc. It would not be beyond the scope of possibilities for this to be an impressively big troll. Players have done this kind of before. However, if larger lobbies are coming to the game then this makes things a bit more interesting.
200 player Fortnite lobbies would completely change the competitive balance of the game. This does give some weight to testing it out on high-level players first. We can’t really be sure if this feature is actually in the works.  The server might exist simply to test new mechanics and features in high-stress environments. Or it could not exist at all. However, this scrap of news has definitely wet players’ appetites for whatever is coming next for Fortnite.