Chapter 2 of Fortnite has been relatively stable compared with Season 10. That Season had near-constant map revisions, the new map of Chapter 2 has remained pretty much the same. This looks set to change though, a new event in Risky Reels has already been announced. Just prior to this, dataminers found indications in the game’s files that this change wasn’t just going to be limited to an event. It is looking like something in Risky Reels is due to change for the foreseeable future.
The next big event coming to Fortnite is quite similar to their last crossover, it’s Star Wars. Specifically, a new scene from the latest Star Wars movie is going to be shown on the screen at Risky Reels, In-game. This is going to alter things while the event is going down. However, dataminers have found evidence to suggest that Risky Reels might look a little different after everything is done.

The main event coming to Risky Reels is a live movie showing. After Epic extended Fortnite Chapter 2, they promised more live events in this period. This is the first one to actually materialize.  It has currently been shown off with in-game posters. An exclusive scene from Star Wars Episode 9 is due to be shown over on Risky Reels. This is happening live on December 14th Posters also advertise some sort of appearance by the director of that movie, J.J Abrams too.
When this event launches, it is likely to utilize those no-kill lobbies that Epic has broken out for events in the past. This means unless you fancy watching some Star Wars clips, you won’t have too much to do in Fortnite for half an hour. The event is due to start at PM EST, 7 PM GMT, or 11 AM PT. It is currently unknown how long the event is going to last. However, it likely won’t be taking all that long since they’re unlikely to be showing any serious chunk of footage.
This live event might not quite have the same appeal as the Black Hole, but for Star Wars fans It looks like a fun experience. 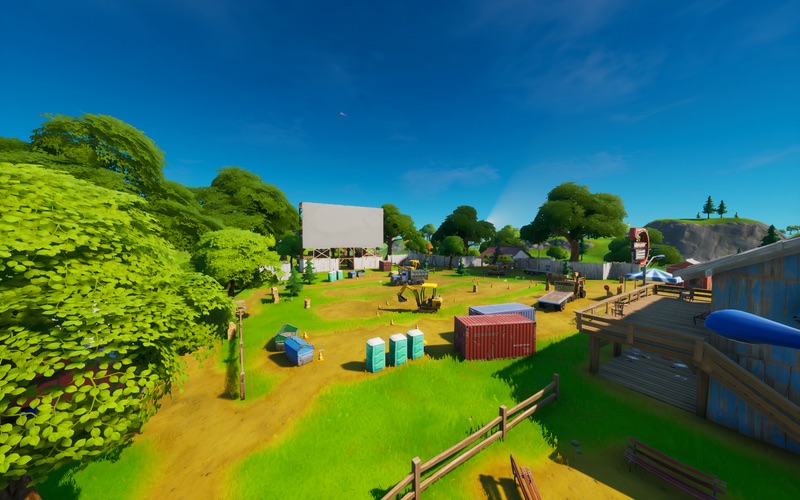 Dataminers have found files in Fortnite that point towards construction at Risky Reels. With scenery moved out of the way for the event, these construction crews are likely going to remain. This could leave us with quite a different Risky Reels once the event is over.
This isn’t exactly the biggest map change to ever happen. In fact, it is actually quite small. However, the Chapter 2 map has remained so static that this has become big news. Even this small change is likely to bring more players over to Risky Reels. If you’re planning your rotation around whatever big POI is currently the big thing in Fortnite, then Risky Reels is definitely the place to go at the moment.
Fortnite Chapter 2 has remained pretty static since its release, but there is still a lot to be doing. Our guides cover the new mechanics, fishing, the map, the weapons, and everything else in the game. You should also check out the best Fortnite settings, to make sure you’re running the game as well as you can.