Unlike the earlier days, Team Rumble is no longer an LTM and it looks like it is a permanent part of the game’s playlist. Re-spawning guarantees you action with the weapons you already had. Hence, for elimination challenges, make sure you reach the location early to get those kills. Remember the storm closes in pretty fast and watch out for those supply drops. 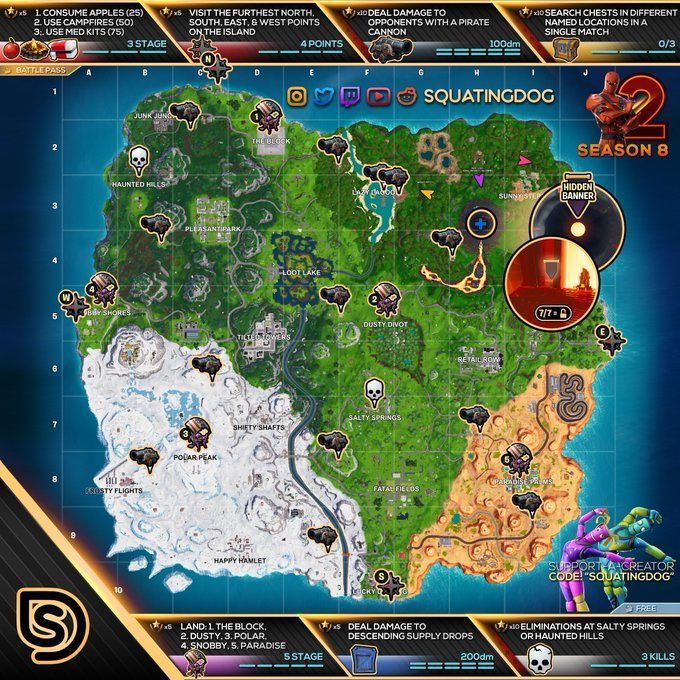 The above Twitter user, SquatingDog has uploaded a cheat sheet for Week-2 challenges.

Here’s the recommended order to follow while completing the challenges.

Challenges to Complete While Playing Solo:

The first two challenges are basically “landing spot challenges” and can be done back-to-back while in the solo mode. In the team rumble mode, since the re-spawning option is available it’s most likely you’ll forget to use campfires and medkits. Hence complete the “campfire and medkits” challenge is Solo/Squad/Duo modes.

The ones that finish quick (such as the landing challenges) ideally have multiple locations in them. Don’t be bothered about finishing with a win, rather push for a faster game-play once the challenge is done.

Challenges to Complete in Team Rumble

Team Rumble features multiple supply drops at various stages of the match. Once the circle is decided you can see various supply drops marked on the map. Shoot the parachute carrying the supply box for 200 Hp and the challenge is done. Finding a supply box is relatively easy in Team Rumble.

Dealing Damage with Pirate cannons is the trickiest/hardest challenge of the bunch. The majority of the streamers completed this challenge by heading straight to Lazy Lagoon and hoping for enemies to show up. Apart from Lazy lagoon, you can refer to the cheat sheet for multiple locations where you can find pirate cannons.

The key is to observe where the final circle is most likely to end up. Once the circle is finalized, consult the cheat sheet and head to a location where you can get a pirate cannon. After you get hold of one, make sure you stick with it throughout the match and keep firing cannons at opponent’s structures that are being built. The cannons can break through structures and cause damage to opponents.

That’s pretty much what you’ll have to do to complete this week’s challenges.

Let us know in the comments below