Players will have been introduced to the basics of Horseback fighting in the Mordhau tutorial, but they might not have stuck around to use horses in actual gameplay. They are a little specialist. Many players would rather focus on the deep dueling system or the ranged combat than spend time finding a horse and charging. Horses are a pretty effective tool in Mordhau though. They might even be quite overpowered how the game currently stands, as long as you know how to use them.

A lot of this comes from Mordhau source material or the hodgepodge of semi-historical semi-fantasy clichés that Mordhau is actually based on. The weapons in the game don’t actually lend themselves to stopping cavalierly. There is a reason cavalry were used in combat until they met trenches and tanks, there wasn’t a great way to stop them before that. Mordhau horse combat is true to this. In the right hands, you can do a serious amount of damage on horseback.

Along with having different controls and mechanics, horseback combat in Mordhau comes with its own strategies, tactics, and set of weapons to aim for. Which of these you’ll use is going to depend on your game mode. In some game modes, horses are more abundant than others. If you’re aiming to get stuck into fighting on horseback, you need to learn a few things.

Finding Horses and Using Them 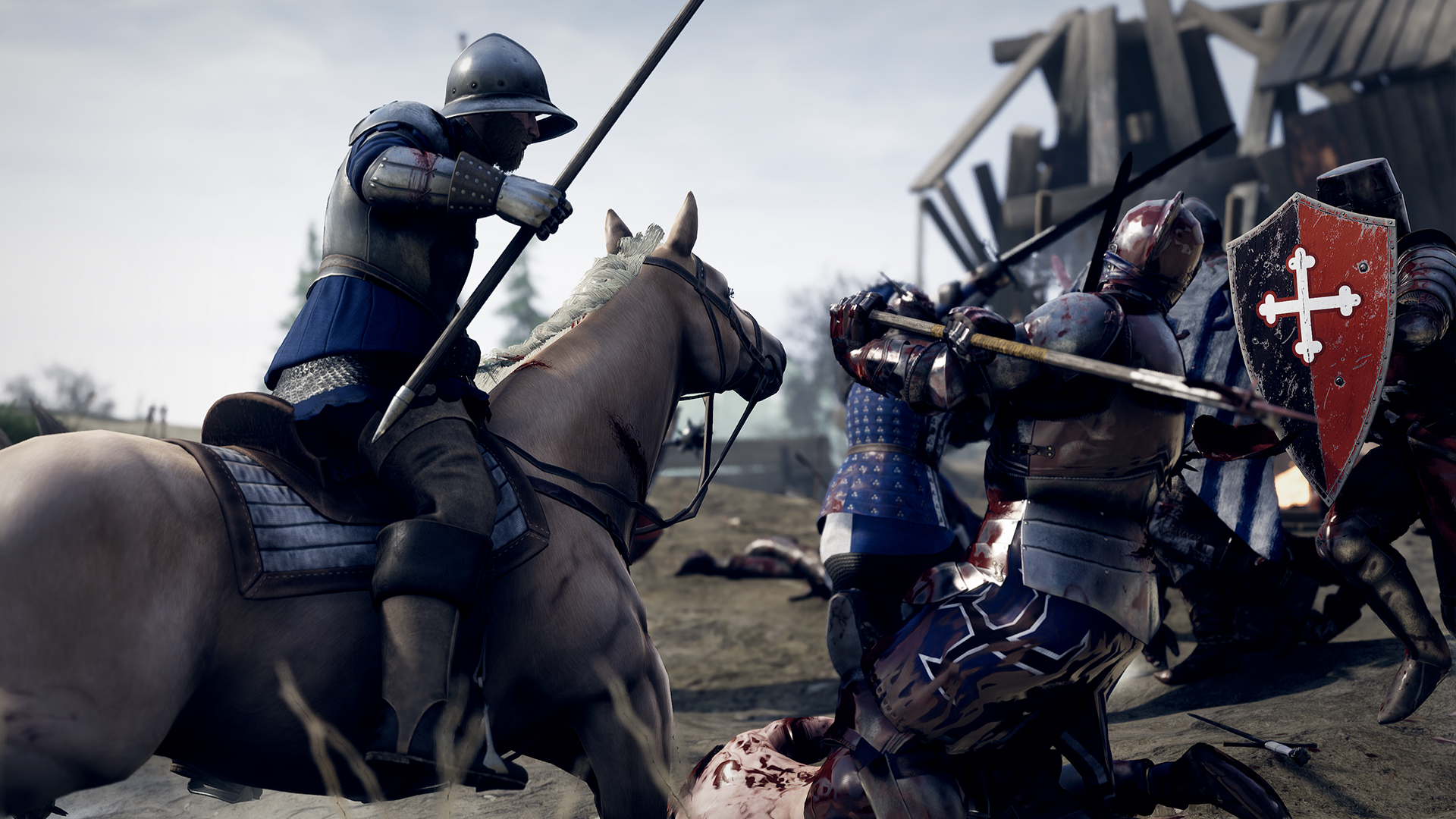 You can find Horses in the Battle Royale mode, but you’re leaving yourself a little more open to the whims of RNG to give you a weapon that is useable on horseback. As much as you might enjoy the safety of being atop a horse, without a decent weapon you won’t be much good taking out enemies.

Things are different in Frontline where you can make a b-line directly for the horses and take your best weapon up there. You really do need the right equipment though. Even if you’re a committed cavalierly player, you don’t always need to be on horseback. If you don’t have the right equipment one game, take it easy and play normally, give it another go next time. Much like being a good ranged player, being an effective horseback player depends on being an effective melee player.

In Frontline you can find horses on the map by certain checkpoints. To ride one, just click the interact button. Your horse’s speed can be adjusted by pressing W and S. Even without using a weapon, a horse can do some major damage. If you so much as trample an enemy, you can rack up quite a bit of damage. This makes them a little dangerous in skirmish situations. Friendly fire is in effect, so your horse’s rampage can end up doing a lot of damage to both your team and the enemy. 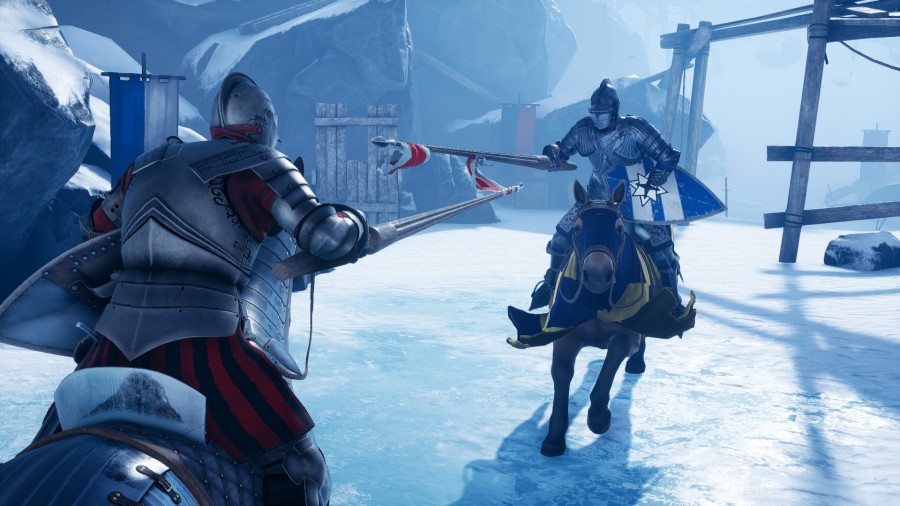 Some weapons have a specific attack with which you can joust. The poles, spears and greatsword weapons work the best for this. Press the kick button to lower your weapon, then as you travel your weapon is held low to skewer any enemy that gets in your way. This is a passive attack. So it doesn’t really hurt to have your weapon lowered whenever you’re passing groups of enemies. The skewering is a definite kill attack unless they manage to block it. This makes jousting a really effective attack, especially if you have a spear or other sharp long weapon.

This is quite hard for ground troops to block. It is possible, but since you’ll be coming and going at such a speed you’re unlikely to get punished for any mistakes. This makes jousting kind of a free space to do whatever attack you feel like. As long as you’re not knocked off of your horse, there little most enemies can do to stop you. If you miss them, you still get to escape.

When taking damage on a horse it is important to consider your health and the horses. If your horse dies you will be left high and dry. It is often easier to take the brunt of the attack yourself and then retreat to safety while you heal up, the mobility your horse provides makes this more viable than playing it overly defensive on horseback.

While on horseback you can also stab and slash just like you would on the ground. You can even use ranged weapons on horseback. Slashing is particularly risky though since it is quite possible to hit your own horse. The hitboxes in Mordhau are realistic to a fault. It’s the same system that lets you chop off your enemy’s heads so it is a fairly good trade-off here. Your horse can’t ever heal either, which makes all damage to it risky. If you don’t want to end up with a dead horse, you need to be very careful about how you attack. 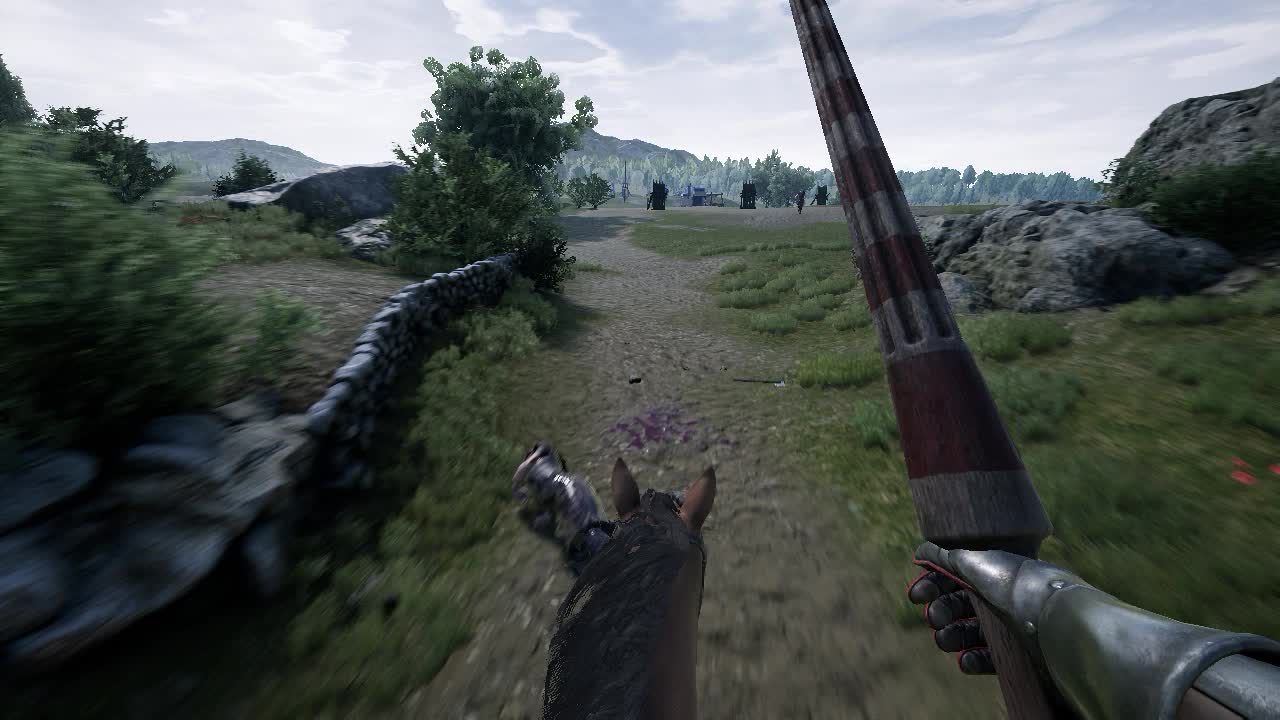 Slashing on horseback takes some getting used to. You can’t use the same advanced dueling mechanics as you can on the ground. With some practice, you will be surprised how tactically you can fight with a weapon on horseback. Your aim has to be just right, but being on horseback gives you certain protection that allows for this. You should practice attacking with various weapons while on horseback. You don’t particularly need to even practice against live opponents, instead try to get a feel for the range of each weapon and which is safer to use around a horse.

Horses work best in open areas. They can become difficult to control in enclosed spaces. Equally, it is difficult to maintain their momentum without space to move around, this risks getting yourself cornered and turning the mobile horse into a hindrance to your movement. If you want to use horses effectively, you need to use them in spaces that work.

With some practice on horseback, you should be quickly able to learn the ropes. Unlike melee attacks, there isn’t much deeper strategy to horseback combat. This doesn’t necessarily mean that it is easier, there are just fewer mechanics to learn. With the basics learned you can be quite effective on a horse. The skill with it is more situational and choosing the right spaces to use your horse in. If you’re aiming to be a cavalry player, you need to use character classes or load outs that suit this, along with the proper perks. Learning how other players counter a horseback player might also be helpful, to teach you what to avoid.