How to be a Sniper in Apex Legends

Sniping in Apex Legends is a useful tool that can help set your team apart from the competition. If you want to be a successful sniper in Apex Legends, you need to have a few skills and a bit of luck. The luck section requires either luck of the draw or a coordinated team. You need to be playing in a combination of Legends that supports a sniper, you need to land in a location with enough loot, and you need to find the Sniper Rifles that will let you inflict the most damage.

If the stars are all aligned on those factors, it is just your skill standing in the way of sniping your way to victory. It can seem daunting trying to be a sniper in Apex Legends. They demonstrate impressive skill and a fantastic aim. However, you can learn how to be an effective sniper. With enough practice and the right technique, sniping can help you win more games in Apex Legends.

As with every other skill in the game, practice is key. It builds muscle memory which will help you execute these moves without having to think about it. If you want to be a sniper in Apex Legends, you have to commit to gaining muscle memory for sniping.

The Mechanics of Being a Sniper in Apex Legends 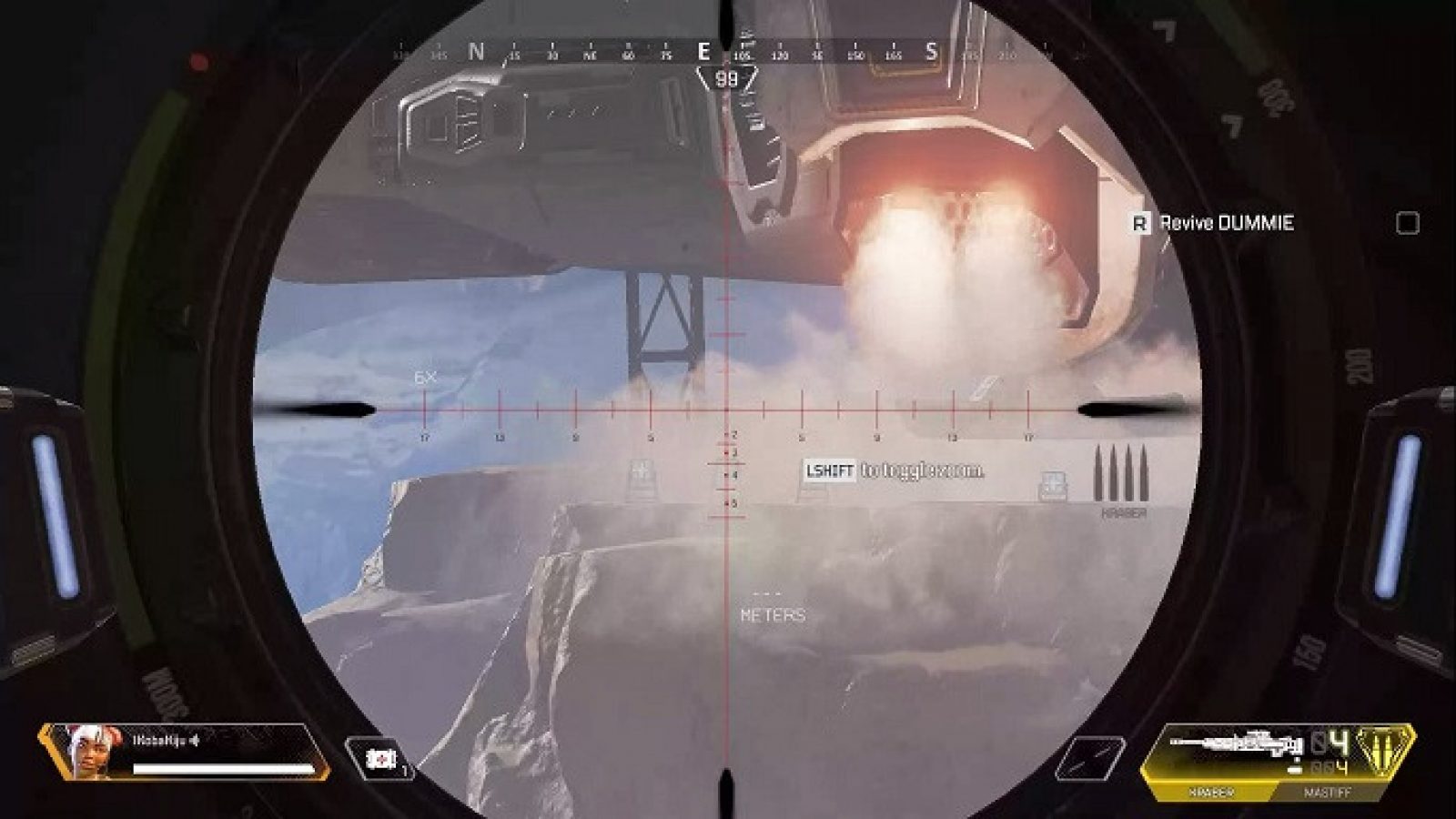 Being a successful sniper in Apex Legends gets pretty technical. It is not a style of play that is suited for someone playing casually. To consistently hit your targets, you’re going to need to get similar with bullet drop and how damage works.

Bullet drop is a factor that comes into play with many shooters that use more realistic gunplay. It means that your bullets aren’t immune to the effects of gravity, you will need to accommodate for the curve of bullet drop. When shooting at long-range targets, you will need to aim above them. Some players might already be familiar with bullet drop from Battle Royale games like Fortnite.

Most scopes in Apex Legends include lines and dots on the crosshair that indicate distance. The first line will represent 50 meters in a straight view, the second 100, and so on. These dots will show you where you need to aim to hit a target and adjust for bullet drop. It might be hard to measure targets up against this or judge their distance at first. Take it slowly, and continue practicing until this measurement is a reflex whenever you open your scope. You can be a great Sniper in Apex Legends if you learn how to adjust your shot for bullet drop automatically.

Apex Legends also has a strange mechanic for armor. Body armor won’t reduce your damage; it just increases your health pool. Helmets will decrease all damage taken on the head. This is a bit of a pain if you’re aiming for the head as a player could survive a direct headshot. You should take this into account when lining up shots. 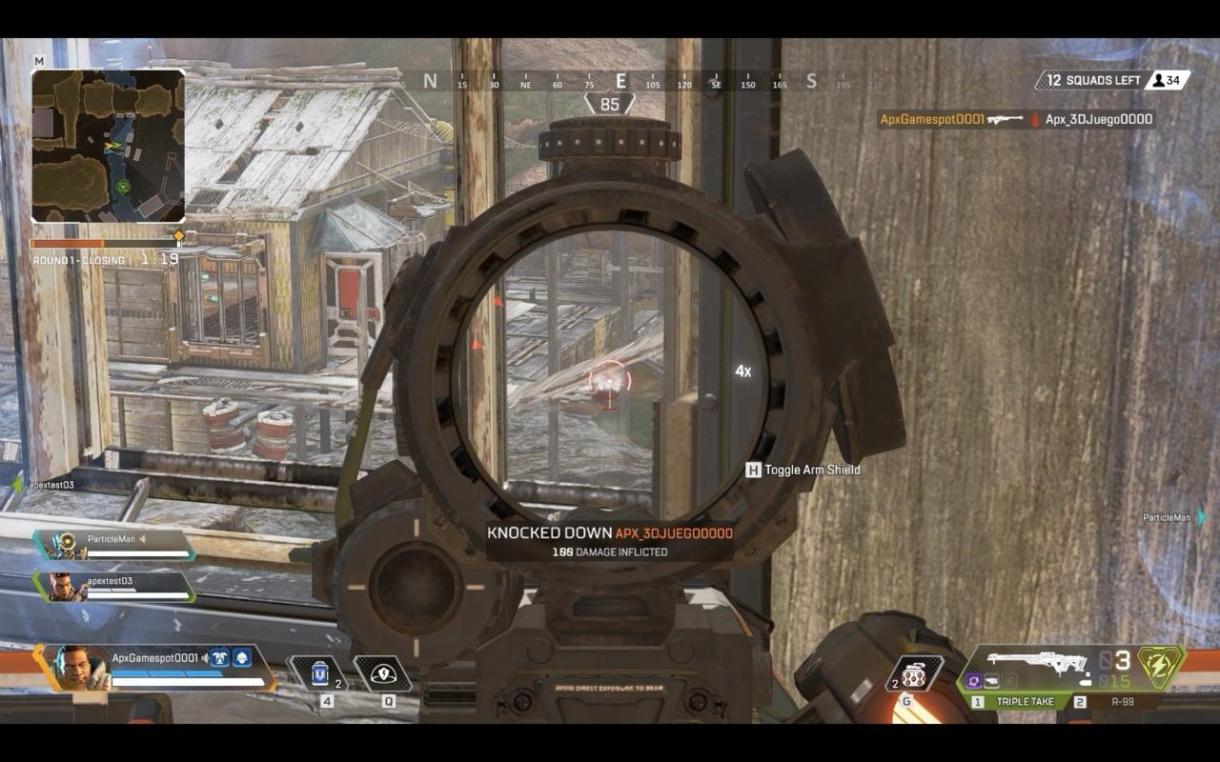 Moving targets are the biggest problem for those learning how to be a sniper in Apex Legends. To start to hit moving targets more often, you need to be aware of some physics in the game. Bullets won’t immediately hit where you were aiming. Instead, they have to travel to the player. This means you will need some practice in adjusting your aim to hit a moving player. There are some universal methods of practicing this, these all apply to snipers in Apex Legends.

The natural instinct of many players is to attempt to follow the enemy with their crosshairs and slip a little ahead of him. Chasing a player around on your scope isn’t going to help you line up that shot. Instead, you should make an educated guess of where the player will be based on their speed and distance to you. Then, just take the shot. If it misses you will have a better idea of where to aim next time. Only through repeating this will you gain a better understanding of how fast players move in Apex Legends.

Once you’ve fired off one shot, the enemy will probably start trying to dodge. If they don’t, you’ve got an easy kill. Most players still dodge in a pattern that makes hitting them a little easier. They will cross from left to right to avoid fire. You can outsmart them by waiting for the split second when they turn around from left to right. Firing a shot at that moment will allow you to hit the player even though they are moving. However, it is recommended that you go for a body shot rather than a headshot in these situations. You’re unlikely to make the headshot but should be able to do some damage.

Surviving as a Sniper in Apex Legends

Some skilled players view snipers as easy kills. There is as much skill in staying alive while sniping as in sniping itself. You need to keep moving. This can make aiming difficult, but it is better to be alive and hitting half of your targets than hit all of them but die relatively quickly. While you’re practicing your ain, you should keep moving around on the spot. This will help you get used to lining up shots with your scope moving around. If you perfect aiming while moving, you will be able to stay alive as a sniper in Apex Legends. You should only stop moving the second that you fire. This gives you the control over your shot without putting you in danger.

You also need to think about what is the best place to be a sniper in Apex Legends. You want to find somewhere that is secluded enough to give you security, high enough to let you take shots all over the map, and accessible. This is a tall order. Certain legends like Pathfinder will make this easy. You will be able to climb to tall and remote places that will give you the security that you need. Snipers also need to prioritize finding a close combat weapon. You will need one on hand to deal with any players who might find you.