Spellbreak gives players the choice of a number of different character classes. These give you a passive ability to enhance your play from the second the game starts, you can also collect scrolls to further augment your abilities. While players collect runes and equipment, you also need to be using your player class to get the most out of your build Ideally, you should tailor these abilities to your style of player and choice of Gauntlets. Each move you make can be supported by a properly chosen bonus skill. Stoneshaper is a class that specializes in augmenting your Stone Gauntlet. Every scroll and ability is designed to benefit those players who always go for stone.

This class will pair well with another class that is more general. It goes without saying that it isn’t a good class for you to use if you haven’t gotten a Stone Gauntlet. You should pair it with a defensive class like Crack Shot or a Rune heavy class like Scholar. This will give you the best results. A good pairing will give you a good balance compared with the lop-sided Gauntlet only classes. However, even for players who use the Stone Gauntlet this class is quite specialist. A few of its scrolls will benefit some very specific types of play and be detrimental to others.

The passive ability for Stoneshaper is Sunder. With this active, targets will lose an extra 20% of their armor when damaged. This is a whole fifth of their armor with every attack. This is a really useful passive ability for aggressive players. When balancing a team, players using Stoneshaper should be making the first attack to half the time it takes to break an enemy’s armor.

As well as the passive abilities of each of your character classes, you can also gain additional boosts with selectable scrolls. Each time you gain a skill point you can access one of these scrolls. The first selective scroll available for Stoneshaper is Earth’s Mantle. This works similarly to Pyromancer’s Passive Ability by allowing you to cheat death. However, it isn’t quite as useful. An attack which would have exiled you will now set your HP to 1. You’ve survived but only for a few seconds longer. This does regenerate every 90 seconds, with that number reduced to 75 and 60 with the upgraded scrolls.

This scroll can be quite useful in certain situations. Once you survive that final shot, you need to quickly get out of the area where you died. Your teammates will have to provide cover for you to get to safety and heal. This can be more helpful with other scrolls selected that give you some armor, this can stack to give you an actual second chance. However, it requires a lot more work to get the most out of than other similar scrolls in different classes.

The second selectable scroll for Stoneshaper is Flesh to Stone. This scroll will set your armor and max armor to 200, then 250 and 300 with an upgraded scroll the drawback, is that your health is then to set 10. This isn’t really enough to survive any attacks once your armor is destroyed. This scroll will be suited to all or nothing players but will hurt other more moderate players in the long run. It takes some confidence in firefights and recklessness with your health to really exploit this scroll. 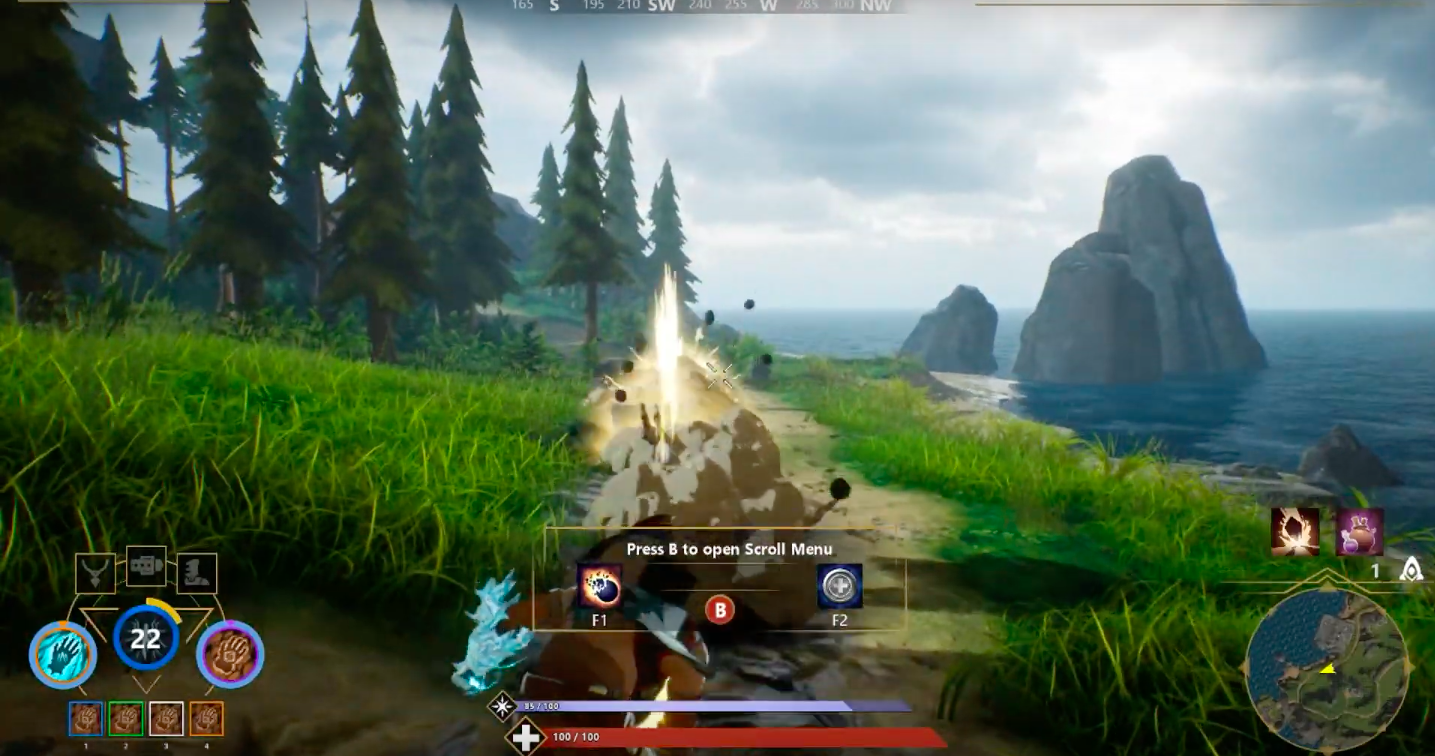 The last selectable scroll for Stoneshaper is Rockslide. The shockwave attacks of your Stone Gauntlet are increased in length by 15% or 30% with Rockslide II and 45% with Rockslide III. This is a fairly simple scroll that increases how useful for Gauntlet is. It also makes the shockwaves bounce off of obstacles instead of colliding with them. This Gauntlet can help you do more damage but it also opens up more possibilities for stronger combos of Gauntlets. This would be more useful if the Stone Gauntlet had more combo potential, but it still helps a few. For example, the shockwave and fire combo can be manipulated with this scroll to do much more damage in a larger area.

Stoneshaper can be very useful for players with a certain play style. To make the most of the scrolls you have access too, you need to be able to retreat from damage whenever your armor is depleted. You need to be capable of dealing big damage yourself while remaining in control of a firefight. It can be a difficult class to actually master.

You need to spend some time practicing with the Stoneshaper class if you want to make the most out of it. It might take some time, but you can adjust to use the Flash to Stone scroll is an adventurous way. You can also learn how to use Earth’s Mantle to actually survive longer than the 1 HP would normally give you. Stoneshaper is difficult to get right, but it can be rewarding.