Spellbreak might be a Battle Royale, but it still has the familiar character classes that are present in almost all RPGs. Like most other aspects of the game, this mechanic has gone through some revisions to make sense in a Battle Royale. One of the special things about Spellbreak is the way they reinvent these standards for use in this type of game. With Spellbreak classes, the spirit of choosing a discipline has been kept but has it been made casual enough to not stop Battle Royale gameplay from getting too dense. The Spellbreak character classes decide one of your Gauntlets, and they give you special bonuses with each round you survive.

Rather than being tied to progression through one-character class, you get to pick which class you play as many times as you’d like in Spellbreak. At the beginning of each game, players can choose their character class for the duration of the game. You can use a different class in each game if you’d like.  However, given that you can get special bonuses and a specific Gauntlet with your character class, it’s better to keep one as a main class.

With each of the Spellbreak character classes, you get an exclusive ability in-game. These are catered to the Gauntlet that comes with your class. You spawn with a common gauntlet of the type suited to your class. Every time you reach a new circle, you get an additional skill. This makes you more useful with your Gauntlet, and powers you up for the rest of the game. This Spellbreak character class guide covers what you need to know about each of the classes, their abilities, and what they do.

This guide covers each in more detail, including their abilities and effects. 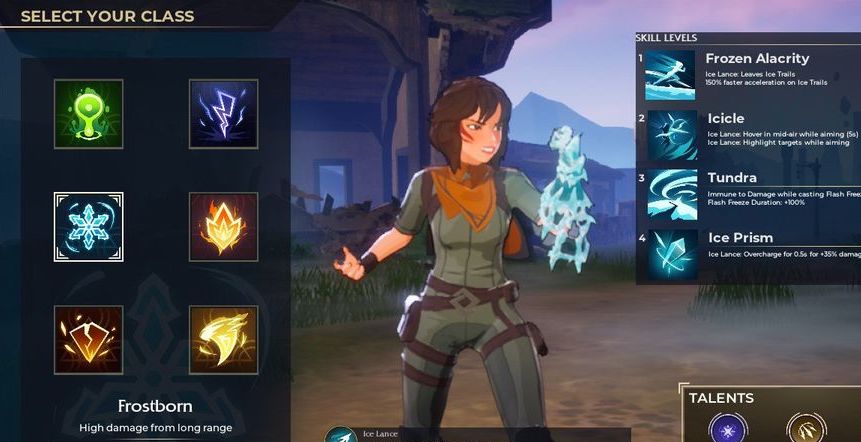 Frostborn is the Spellbreak class that comes with the Frost Gauntlet. This one is obviously ice-based. The ice gauntlet can be quite tricky to master. The abilities you get here help you to make more precise and damaging shots with the Ice Lance but also adds some immunity and other effects. You can begin to use ice trails as a mobility option once upgraded. These are the skills.

The Frostborn class locks you out of ice trails until level 2, which is kind of a hassle. However, if you’re trying to use the sharpshooter ice attacks then you really can’t do without these abilities. The Ice Lance is designed around access to these, so it isn’t as much use as a secondary Gauntlet. 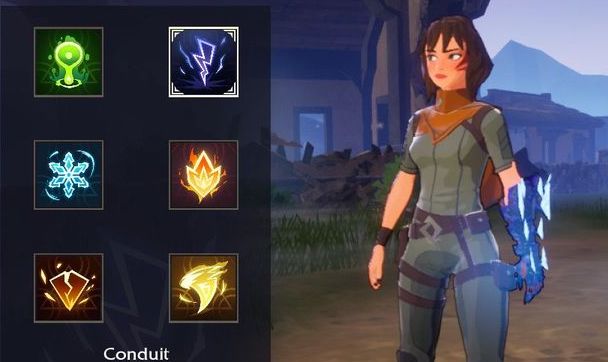 Conduit is the lightning class in the game, so it comes with a lightning Gauntlet. This one is a little simpler to use and it helps you to do things faster. This is to tie the lightning gauntlets into puns around doing things lightning fast. It still provides some decent utility to a Conduit player and it helps that this one is giving you a benefit outside of the Gauntlets. These are the abilities:

The end result of all of these abilities is allowing you to fire off lightning-quick, without pausing, and with a rune charge for a quick escape if you need one. At the end of the game, you’re left with a powerful Lightning gauntlet for fast flurry attacks, with a free panic button in your Rune to escape. This one can be a lot of fun, although it isn’t as useful in early rounds as some of the others. 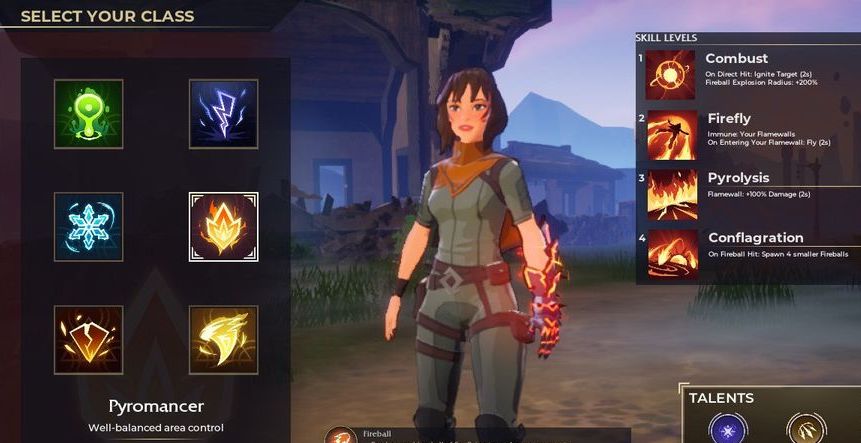 These classes make your Fire Gauntlet more effective. However, the zoning capabilities when you have immunity to flamewalls are pretty big. This is a good way to box other players in or out, so the flight that comes with entering your own lets you take down other players while zoning them out. Pyromancer is a simpler class to use, but you can do some good things with a coordinated team. 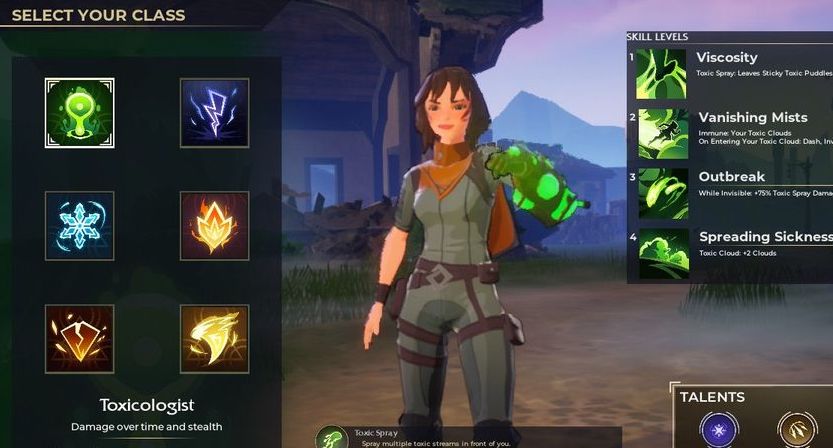 Toxicologist is a popular class and one that gives you access to a common toxic Gauntlet. It is great at helping you deal more damage over time and stay undetected. This style of play is something quite different, and this is a pretty great specialist class compared to some of the others. These are the abilities that you get access to:

This set of abilities is going to give you more damage and utility to do long term damage with your toxic shots. The invisibility is a fun bonus too. This one is rarely used to full effect, but you should be taking advantage of it as much as possible. 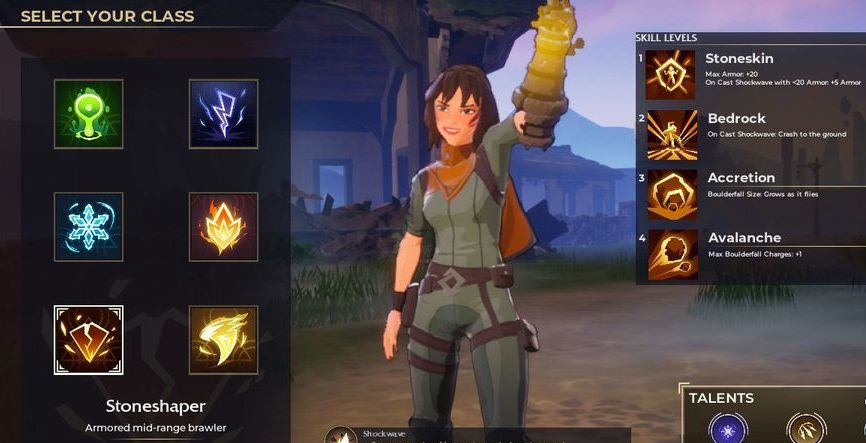 Stoneshaper is the class for the Stone gauntlet. As well as helping out that Gauntlet, you can use abilities to give you extra defense. This is a class that doesn’t take as much skill to master. The extra defense and everything is going to help you out over time. With hard-hitting stone attacks too, you can use it to play like a tank character for your team. These are the abilities:

The abilities here add a whole new set of skills to using the Stone Gauntlet in the late game. If you have access to these abilities, you can get a lot more value out of the stone Gauntlets. The trade-off is that you don’t have this for the first few rounds, so you can’t rely on the better form of Boulderfall. The armor boosting properties are helpful for the first few rounds, but potions are hardly in short supply. 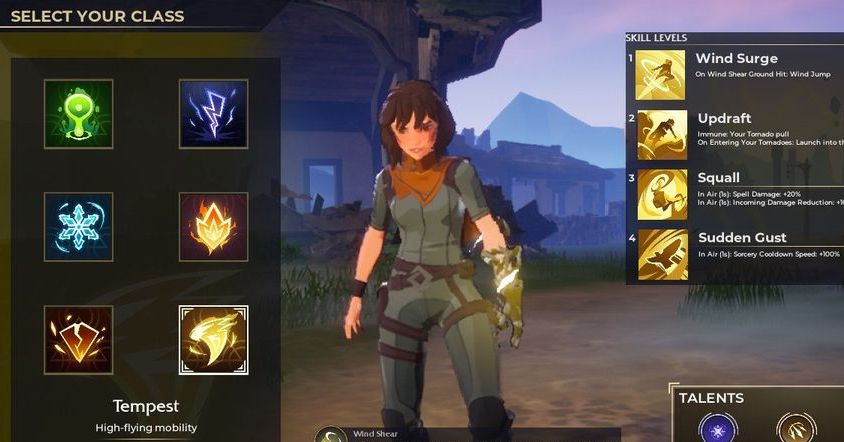 Tempest is the class to go with the Wind Gauntlets. This one is focused on flying and mobility. A few of these used to be part of the Gauntlet itself. Now, they’re separated out. This one is a pretty specific high-mobility play style. If that’s something you can manage, then this might be a good class for you. These are the abilities:

The mobility and jumping portion of these abilities are useful for utilities and moving around. However, you will need to figure out how to use this with runes. The mobility boosting runes can extend this even further.

Which Spellbreak Character Class Should You Use?

Deciding which Spellbreak class to use isn’t as complicated as it used to be. Now that they’re tied to the Gauntlet that you land with, you have one fairly easy way of picking. The character class that guarantees your preferred Gauntlet is a good choice, since it makes it pretty simple to always have the weapon your most proficient with accessible. On top of this, you get abilities that power up that specific Gauntlet. If you’re looking to build the rest of your loadout around that main choice of weapon, then our other Spellbreak guides can help you get everything optimized.