Spellbreak is a new Battle Royale with a unique combat system of magical Gauntlets that give you elemental power. These Gauntlets are the basis of gameplay with their combos, but there are other elements in the game that you need to master. One of them is Runes. Even if you know all the advanced tips and tricks for Spellbreak, you still can’t win with only Gauntlets. Runes give you an ability to throw out at any point in the game. You can teleport around the map, become invisible, and even see the outlines of every enemy. This Spellbreak Runes guide covers all of the runes currently in the game. This is what you need to know about the special abilities in the game and how to use them to your advantage.

Runes are an ability in Spellbreak that allows you to tap into a special ability. These are the basics of how they work:

This is all quite simple, but using each at the right time is trickier. These are the Spellbreak Runes in the game at the moment:

There are a few more Runes that are currently disabled in the game. They might be back in the future, or after they’ve had a re-tool. These are the missing ones:

Those are the basics about Spellbreak runes. Using them effectively though is a bit more complicated. Runes are plentiful in the game, so you rarely have to struggle to find the one that you need. That means you can afford to be a bit picky. Your choice of rune is partially going to come down to your class and Gauntlets, but also how you like to play. These are each of the Spellbreak Runes and what you need to know about using them all at exactly the right time.

The Springstep rune allows you to leap into the air in the direction you’re currently moving. Mechanically, it works a little like a Glider Redeploy or the Mythic Silver Surfer Surfboard in Fortnite. It is great as a panic button, covering ground when rotating, or grabbing a better angle when fighting.

In terms of what play style and class pair well with Springstep, it has some great utilities for Frostborn players. The spring in the air, when combined with the slowdown for aiming your ice lance, can give you a great position to take a shot at another player.

Outside of that specific interaction, the Springstep is great for grabbing a quick better angle in any type of firefight. Most Gauntlets’ primary weapon can benefit from this. You do need to be careful with Gauntlet combos though. You can easily make a mess of the ground below you when you fall.

The Dash Rune sends you dashing ahead in the direction you’re facing. The grey variety has a cooldown of 9 seconds, the green 7 seconds, blue 6 seconds, and orange 4.5 seconds. Once you get up to the higher rarities, you can zip around with it fairly often. It can nearly be a general speed boost.

This is a rune that is simple to use on the surface. You just use it to go a bit faster! If you go a bit deeper though, it can become more helpful. Using it tactically in matches can throw enemies. You can literally dart from in their line of sight to behind them if you’re positioned correctly. If you’re running the Dash rune then you should try to practice these angles and get sense of distance for the Rune. Once you have the timing down, the dash rune can be pretty helpful in Spellbreak.

The invisibility rune is a fairly simple one, you become invisible briefly and your run speed increases by 3. The cooldown for the grey variety is 10 seconds, the green rune is 8 seconds, blue is 7 seconds and orange is 6 seconds. It lasts for 8 seconds to start with. This is a decent amount of time, especially in a firefight.

While some runes pair great with one class, invisibility pairs badly with one specific class. Toxicologist gives you access to better invisibility ability in the later levels. This makes this rune a bit redundant. If you particularly enjoy that stealthy style of play though, you can use this rune and the toxicologist ability one after the other to skip the cooldowns.

Invisibility has two main utilities, taking a better angle for a firefight and escaping from one. Both work okay, but using it for repositioning is probably the better way. It works particularly well if you can use it to get up to higher ground while invisible. The further away from your normal position you can travel the better. Try to move out of your enemies’ sight, even if this means going directly past them.

The Wolf’s Blood rune is pretty unique in Spellbreak at the moment. The other non-mobility runes are currently disabled, leaving just Wolf’s Blood. This locks you into a loud howl, then you can see the outlines of opponents through obstacles for a short period. Your run speed also increases by 4. The cooldown lasts for 12 seconds at the grey level, 9 and a half seconds at green, 8 and a half at blue, and 7 at orange.

This rune is best suited to players who are perusing enemies aggressively. It isn’t too useful for Frostborn players, since an ability gives you a watered-down version later. If you’re using Wolf’s Blood, you need to be confident in taking fights and ambushing other players. It’s worth keeping in mind though that the animation isn’t the shortest and the howl isn’t exactly hard to hear. You need to be relatively safe when you first launch the rune unless you want to take a fair amount of damage.

In team game’s Wolf’s Blood is much more useful. One teammate can cover you while you use it, once activated you can inform other players of enemy locations. This makes it a lot better since you can actually take the enemies in your own time. It also helps you assess the dangers of pushing towards a position if your team is weakened. Throwing one out before opening mana vaults is a good idea, just to survey players that might be waiting for you.

The featherfall rune pushes you high up in the air, you then descent slowly. If you cast a spell while descending, you’ll drop normally. At the grey level, the cooldown here is 14 seconds, the green has a cooldown of 11 seconds, blue is 10 seconds, and orange is 8 seconds.

Aiming the teleport spot can be fiddly. If you’re aiming it far away, then it can be hard to be precise. If that’s the case, then you should go for speed rather than the exact detail of where you land. The teleportation rune is great as a panic button, so you’ll need to master aiming it.

The teleportation rune is probably the best one for sheer mobility. You can get wherever you want, whenever you want. In combat, you can grab high ground with it, but that charge up animation is something to be careful of. It makes it difficult to use it when you’re directly under fire. It is, however, perfect for positioning prior to initiating a fight.

Rather than being suited to a specific class, this one is better in one game mode. It works best in Solos. In Squads and Duos, it has its uses, but it’ll often just lead to your team being spread kind of far apart. It can be used effectively for combat in these modes though, as teammates can cover you during the animation. You’ll just have to bear in mind that other players need to take longer rotating. 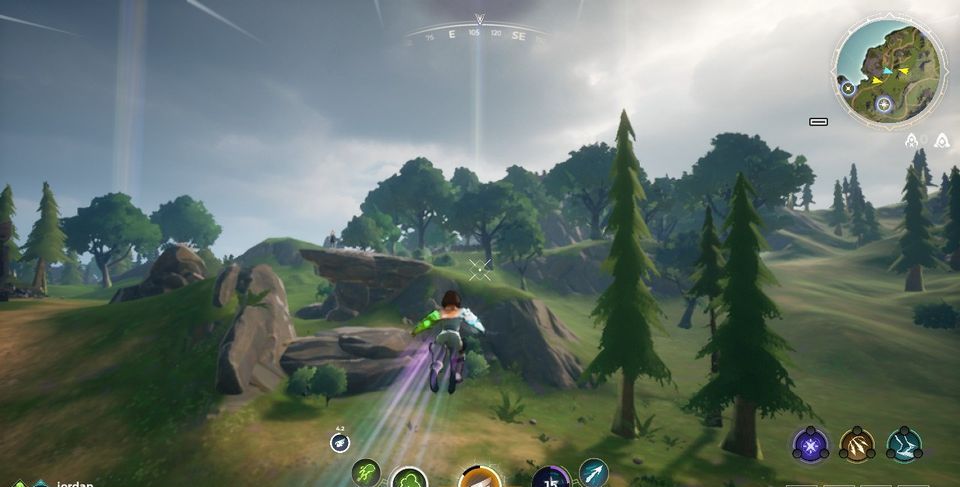 The flight rune is a pretty fun one to play around with. You burst slightly up in the air and then fly forwards until you jump or hit something. Since you’re not particularly high up when you fly, this will often be a bumpy bit of terrain. At the grey level, it has an 18-second cooldown, 15 seconds at green, blue is 12 seconds, and orange is 10 seconds.

The Flight Rune can be cool, but often irritating to actually use. This is best for players who have little options for longer-range play. Pyromancer and some Conduit players can find it very useful, but other classes work too. This one has little utility in combat because of how easily you can hit something and be grounded. If you’re planning on taking a fight by throwing yourself in like a grenade, then this is great. If you’re aiming for shock and awe, then take flight and burst at your enemies like a bullet bill.

This one works for mobility, but it lacks the grace and control of some other runes. Flight isn’t as helpful as it seems. It’s a good way to move around the map but largely outclassed by the other mobility runes.

Which Rune Should You Use?

Those are the Spellbreak runes currently in the game and some general tips for how to use them effectively. Which suits each player is going to vary on play style and preferred Gauntlets. Some classes like Frostborn and Toxicologist have abilities that essentially replace a rune, so you’ll need to keep this in mind when choosing. Runes are something that it is good to experiment with. Each one alters your level of input for mobility. Players might have to experiment and find which ones feel the most natural to them.

For taking fights with runes, it’ll take some time to learn the positioning of where they move you too. Once you have this memorized, you can start to see your openings in fights to use your rune. At first, your repositioning might be more of a panic button. With enough practice, you can get past this problem.

If you’re looking to improve other areas of your Spellbreak gameplay, then our other guides can help: