The new Riot Games game, Valorant, completes a month since it was officially launched on June 2nd. Many uncertainties grew around the FPS due to how the championships, engagement, and the demand for them would be disputed. Since its Closed Beta, the game has attracted several professional players from other games similar to Valorant. Counter-Strike Global Offensive and Overwatch served as the basis for players to announce their exits and migrate to Valorant. As the esports aspect of the game kicks off so do the Valorant Tournaments.

Since the Closed Beta, some companies and organizations created tournaments in order to encourage competitiveness within the game early on. After the official launch of the new Riot Games game, several doors opened up for the realization of events. Unfortunately, for now, these events are being held online due to COVID-19. With this huge increase in the number of competitions, we decided to list some tournaments that already took place in Valorant and were a success, check below:

Team SoloMid (TSM) is the first team to win an American tournament for the VALORANT Ignition Series, the competitive program created by Riot Games. The feat was accomplished on Sunday, June 29 with the title of T1 x Nerd Street Gamers Showdown.

TSM won the VALORANT Ignition Series tournament after winning the T1 final by 3 to 0: 13 to 4 in Haven and 13 to 9 in Split. This is the team’s fourth title this month, which also won the CLG Blitz Cup #2, Immortals First Light and Lof x DTS Invitational Series.

TSM started competing in VALORANT at the end of May when it acquired the quintet that had been competing for mouseSpaz and which is made up of renowned players who have already competed in Counter-Strike: Global Offensive (CS:GO).

First VALORANT championship played in Japan under the seal of Riot Games, the RAGE Invitational ended on June 21st with Absolute JUPITER climbing the highest step of the podium after winning over Lag Gaming in the decision.

The team dominated the competition from end to end, winning all the maps they disputed with relative tranquility, entitled to two 13 to 1 and a 13 to 0, this one against SunSister Rapid. In the decision, the scores were 13 to 8 in Ascent and 13 to 6 in Bind.

Absolute JUPITER, curiously, is the first VALORANT team to be formed in Japan after the team that competed in Counter-Strike: Global Offensive (CS:GO) migrated to Riot’s FPS.

Organized by Immortals, Immortals First Light is yet another VALORANT tournament that Team SoloMid (TSM) finished in first place. The title was won on June 15th. 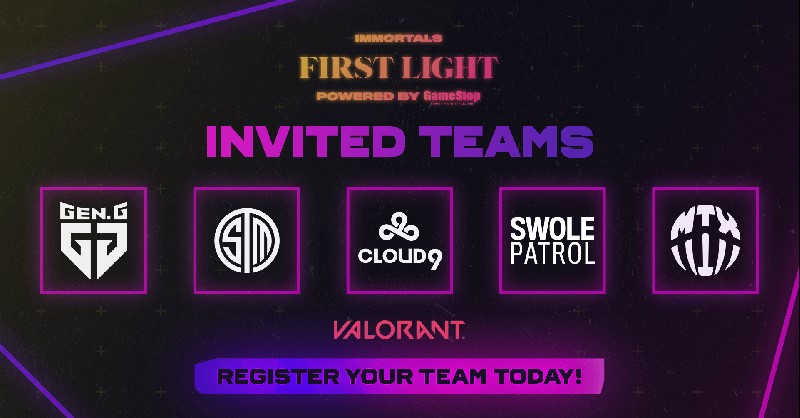 TSM let out the cry of champion after winning over Cloud9 in the grand final by 2 to 0. For the title, the team received a prize of $6 thousand dollars, while the runner-up was left with $3 thousand dollars. Immortals, which finished third in the tournament, received a $1,000 prize.

With the participation of large organizations already present at VALORANT, the second edition of the CLG Blutz Cup came to an end with Team SoloMid (TSM) climbing the top step of the podium. The team won the championship after defeating Gen.G in the decision by 2 to 1: 13 to 11 in Haven, 9 to 13 in Bind and 13 to 10 in Ascent. This is the organization’s first FPS title at Riot Games, which it joined at the end of May.

TSM debuted in the competition by winning Destined 13-0 in Ascent. Way 2 French was the team’s victim in the quarterfinals: 13 to 8 also in Ascent. On the same map, the team led by Matthew “Wardell” Yu beat Immortals 13-8.

Gen.G’s VALORANT team has the power to recover. The team climbed to the top step of the podium of an important tournament played in North America: the Pittsburgh Knights Tournament Series. This happened the day after being runner-up in the second edition of the CLG Blitz Cup.

The title was won after the team won the grand final together we are terrific by 2 to 0. The achievement earned Gen.G a $3,000 dollar prize, while runners-up took home $1,500 dollars. China Nguyn completed the podium in third.

The team’s dominance over opponents continued in the playoffs. Victory over Intensity in the quarterfinals by 13 to 5 and against Big Frames by 13 to 11 in the semifinal. In the decision of the winners’ table, 13 to 5 on together we are terrific.

Having arrived at the clash for the undefeated title, Gen.G got the advantage of 1 to 0 on the scoreboard. The last opponent, again, was the together we are terrific and the victory came with a 13 to 12 in Bind.

The trend is that from now on, there will be several other Valorant tournaments, and with that, the game will be established in the competitive scenario among the FPS. Esports organizations are getting ready to announce their line-ups and actually start competing for their places at the top in the Riot game.