Spellbreak is a Battle Royale completely unlike any other. Those who have played Spellbreak in Early Access are excited about it, with even Fortnite pros being enchanted by this magic-based Battle Royale. Its combat is focused on magic and spells rather than weapons. This can make it a little intimidating for new players who are comfortable with other Battle Royale titles. This beginner’s guide to Spellbreak will cover everything you need to know to start playing Spellbreak.

While the game has a lengthy tutorial, it far from teaches you everything you need to know. There are a lot of key things that beginners in Spellbreak should know before they start to jump into a load of matches. It has a particularly complex system of loot and levels. It emulates an RPG, all within a single Battle Royale game. This is kind of big, so there are a lot of different items and options that you need to know about.

This will all take you a while to try out. While the game has only just been fully released, a lot of players have been in Beta and Early Access for some time. You might be up against some serious opposition in your early games. So, you need to take some time to familiarise yourself with it. This beginners guide to Spellbreak will run through the basic mechanics and what you need to know before you start to play. The first thing you need to do is optimize your settings, then you can start learning the game.

Beginner’s Guide to Spellbreak: The Basics 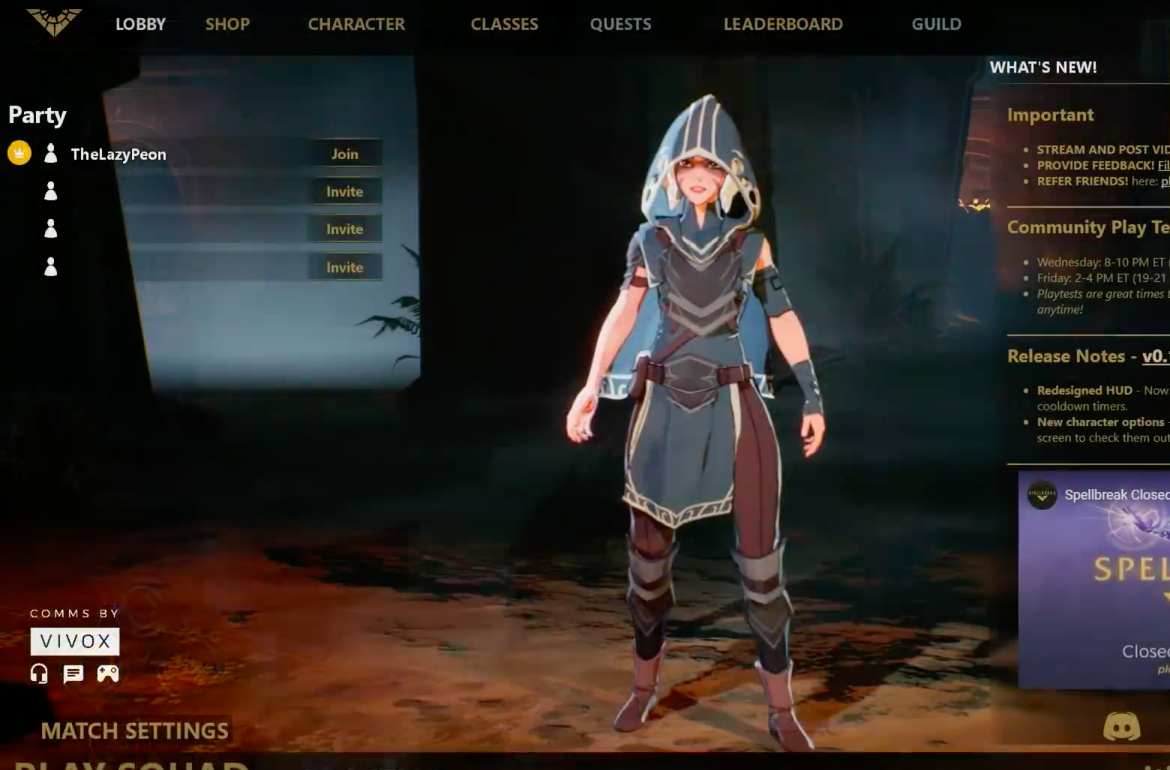 When you first load into Spellbreak, you see the options for games you can play. This will be familiar, there is Duos, Squads, and Solo. At launch, only Squads are currently available. This is probably a matchmaking thing. However, all modes have been playable extensively in the past. Once the launch period is over we can expect the others to be enabled pretty quickly.

The first time loading up is going to be a fairly tedious tutorial, just get through it and try to soak up the basic information. Once you’re finished you now have access to a practice area. If you head into there, you can see that the options and items are much more complicated than they initially seem.

You have choices of Gauntlets, equipment, runes, and even scrolls to power up over the course of a game. If you want to win games, you’ve got to use all of these to their best effect.

The Classes for your character in Spellbreak have been beefed up since the Beta, they’re now a major part of the game. When you launch into the practice area or a full game, you’re going to have to pick a character class first. This isn’t permanent so don’t worry too much. It does however lock you into using one type of gauntlet. The other you can change as you like, but your class decides your primary.

These are the current character classes:

The abilities that come with your class give you greater power or utility with that gauntlets ability. Such as increasing its damage, area, cooldown, or letting you traverse patches of attack from that gauntlet without getting hurt.

This should be your first destination in Spellbreak to get a feel for the weapons at your disposal. You’ll see each of the gauntlets laid out int he practice area, along with runes and other items. The Gauntlets are probably the first thing you’ll want to play around with here.

You have your initial Gauntlet from your character class, but your second Gauntlet gives you access to a new set of attacks too. This practise area is a great space to try things out and see how they combine. Spellbreak Gauntlet combos can be particularly fun, and this is a great place to test them. 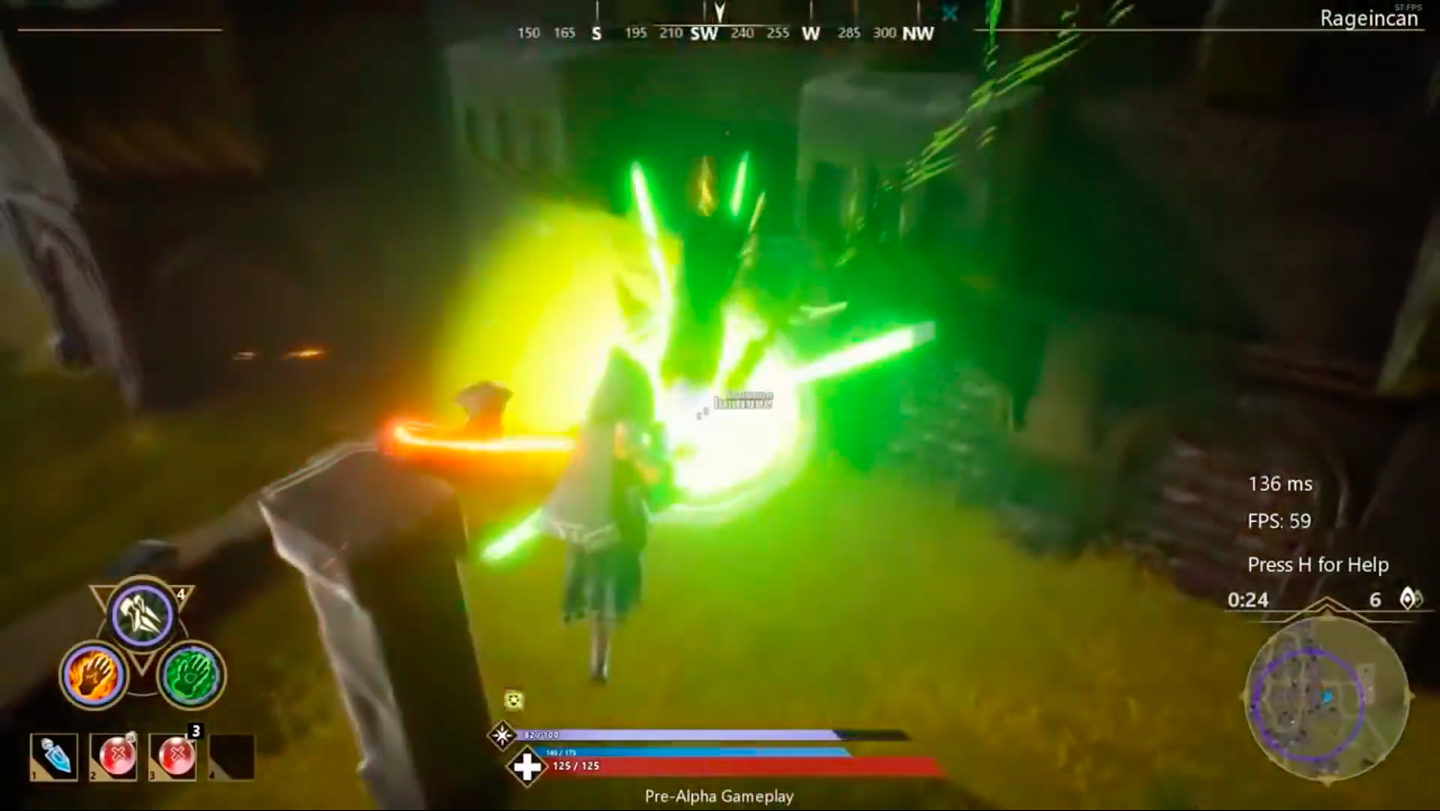 This is where the beginner’s guide to Spellbreak gets a little more complicated. There is a standard inventory system like in other games, but since the combat is magic-based it is quite different from what you’ve played before. Most attacks are done through Gauntlets in-game. These are an entirely separate system that will take you a while to learn. However, there are still some normal inventory slots.

When you go to loot an item, you open up your inventory. You will then be able to pick up anything nearby, not just the item you’ve interacted with. On this screen you can also see your empty slots, making it easy to decide what you still need to pick up. Aside from the main Gauntlets, you will also find passive equipment. These items, like amulets or boots, provide you with a state boost. Some of then might boost the damage you give or increase your movement speed, others boost one specific gauntlet.

You can also find potions around, these need to be stockpiled to help you survive later in the game. You shouldn’t overlook Runes. These are extra powers that you can equip with various functions. They are much stronger than the passive equipment abilities and seriously augment your gameplay. Some provide teleportation, others invisibility, and even flight. You need to play around in the game a bit before you decide which runes suit your play style. You should be trying to match your Runes to the Gauntlets that you’re going to be using. 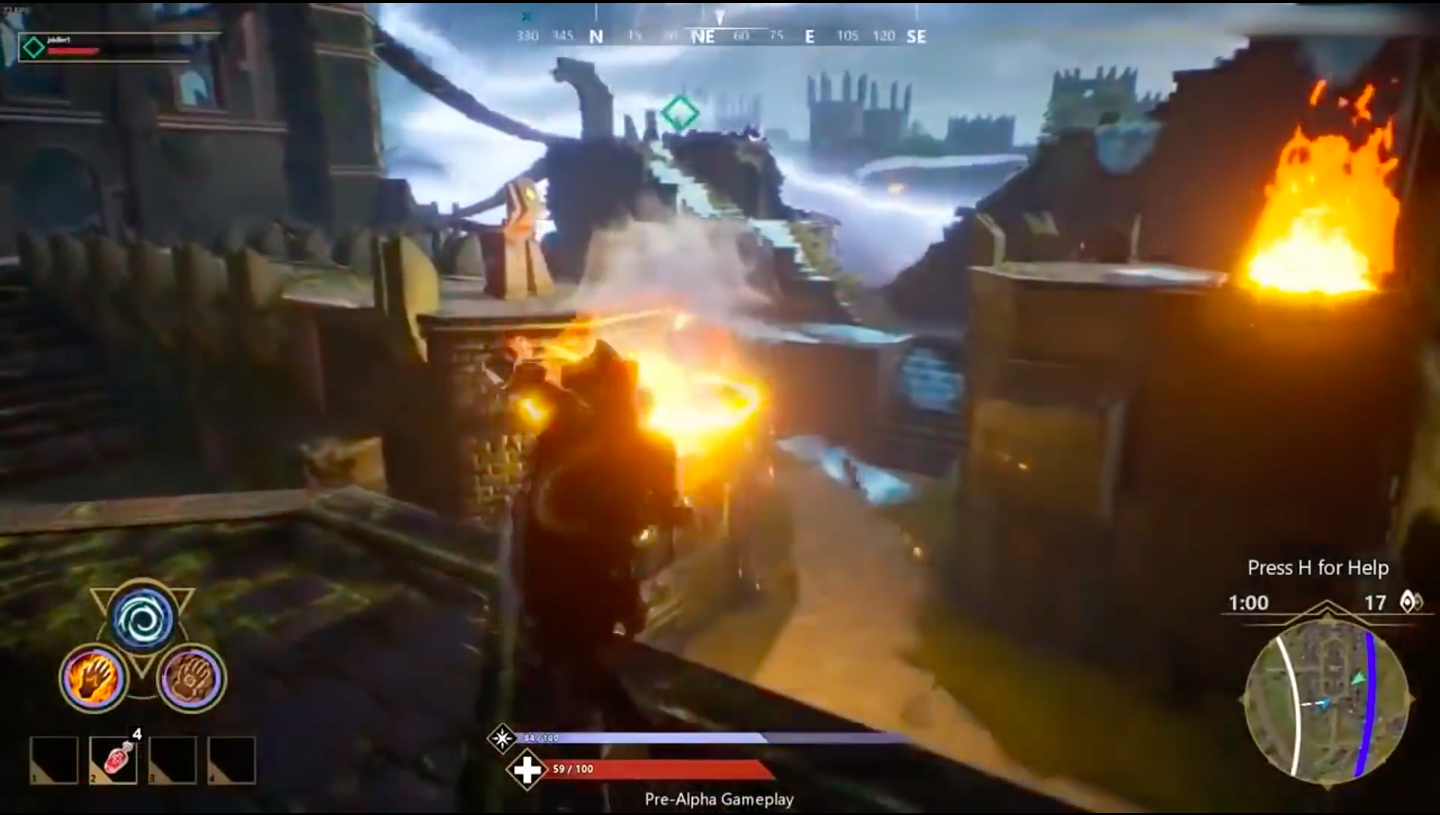 Your main weapon in Spellbreak is Gauntlets. You can equip two of these, one to your left hand and one to your right. Similar to how Moira plays in Overwatch, but it is a lot deeper than simply one attack on each. You can try out each Gauntlet in the practice mode before starting a game, you need to do this. Being more comfortable with the Gauntlets is essential. It takes a while to master each one, so you need to know which Gauntlet you’re going for. Each gives you one power, which can then be combined with the other power for better effect.

For each gauntlet, you have a primary attack and a secondary. The first can be fired quickly, the second is more of a special ability with a cooldown.

The main Gauntlet types are Frost, Flame, Stone, Wind, Lightning, and Toxic. The Lightening gauntlet allows you to fire out electric bolts rapidly at other players. Toxic gauntlet fires a toxic puddle that will gradually damage players. Wind Gauntlet release gusts of wind at other players. The Stone Gauntlet uses a ground pound attack that shakes the earth and attacks in a line in front of you. The Frost Gauntlet is the closest thing Spellbreak has to a sniper. It fires a fast and long projectile that can be charged for more range. It also leaves a trail of ice behind it. The Flame Gauntlet allows you to shoot out some hard-hitting fireballs.

These are the basic Gauntlets. You can equip two at once which can be combined. With two equipped, each Gauntlet can use the effects of the other to make a more powerful and difficult attack. Each gauntlet is a different combination so experiment with how they interact. 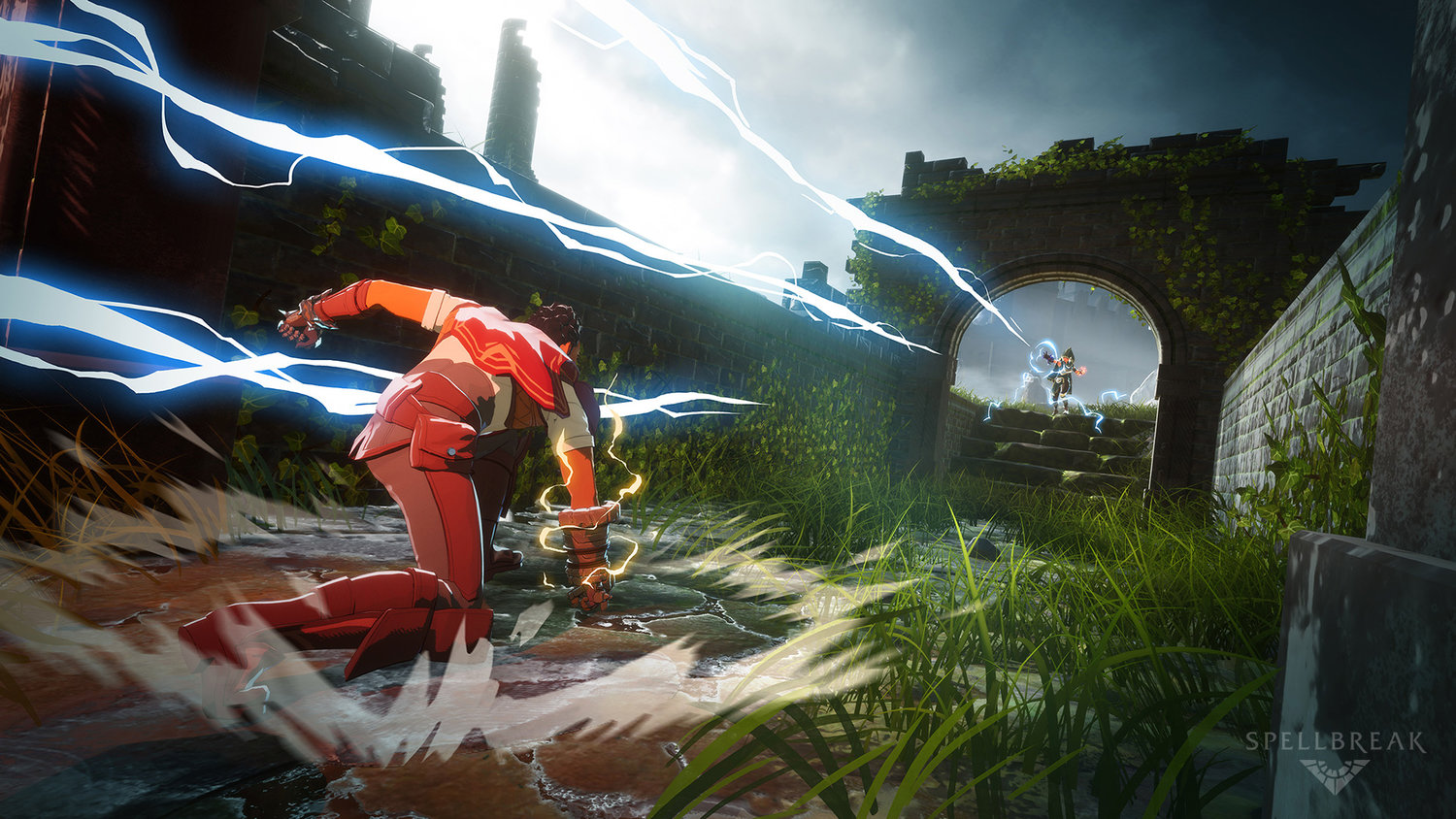 As well as a magic attack, each gauntlet gives you a sorcerer’s ability. These abilities are rechargeable and each has a different use. Some of them are projectiles, others are an auto-aim attack. Since these attacks have a cool-down and not mana, you need to budget them differently to how you would Gauntlets. You need to ensure you have them ready for use if you need to take on another player.

Like the Gauntlets, these have interactions with the various attacks too. Some of these are quite familar feeling from other games, like throwing up barrier walls.

The last major mechanic in the game is your talents and equipment. This is another area where you really feel the RPG mechanics. There are a few different types of equipment that you’ll be able to access in-game. This is everything on offer:

These bonuses are more substantial than they initially seem. If you make the effort to pick them up, you’ll have a noticeable upgrade by the end of the game. Talents are other bonuses that you can upgrade with points. These come in three types. The first is mind which hypers with runes, mana, and spells. The second is Body, which helps with spells and health. The last is spirit. This helps with run speed, damage taken,  and health.

Runes are unique abilities that you can activate with a cooldown timer in-game. These are some of the most fun aspects of the game. Once you get to grips with these, you can combine them with Gauntlets to make some really impressive attacks. These are the runes on offer:

Most of these are focused on mobility, which can become something quite impressive with combining gauntlets and stacked bonuses for equipment!

Spellbreak is a deep and complicated game that will take a while to learn. This beginner’s guide to Spellbreak has covered the essentials but not the deeper complexities. To really get a handle on Spellbreak, you have to experiment. Spend some time in the practice area combining Gauntlets and testing things out. After a while, you will learn what type of Gauntlets and abilities you’re going to focus on. If you can master all of this now, you’ll be ready to get plenty of wins by the time the game launches fully.