Mountain Peak is a Mordhau map that is up there with Tourney for commitment to its theme and atmosphere. This is a relatively small map that spreads players across the top of a mountain. With a lot of movement taking place vertically, it isn’t the best balanced of game maps. Some character class will get along much better with Mountain’s Peak than others. However, while it isn’t as well balanced as Camp Mountain Peak is a unique Mordhau map that is already a nice change of pace.

Mountain Peak is available in five game modes; Frontline, Deathmatch, Team Deathmatch, Horde, and Skirmish. It isn’t the go to mode for Horde, but if you’re after a Horde map to practise your archery tactics then it has its uses. In Frontline games, Mountain’s Peak is noticeably smaller than a few of the others available. It features less objectives and flag than most other maps too. With its enclosed space, it is difficult to escape other players in Mountain Peak, especially archers.

While archers are at a clear advantage, engineers and even horseback players have options when playing on Mountain Peak. No matter what type of player you are, you need to be using the best settings, key binds, and getting the best frames per second as possible.

Mountain Peak is a wonderful Mordhau map for archers. Pretty much any type of ranged player is going to be dominating the game. The map is divided into three general sections going from each spawn point to the other. There is a central lower zone, and two pathways raised up on either side. With this type of set-up, it is easy to see why it is a great map for archers.

The two pathways on either side offer a clear and perfect overview of the central valley. With the side paths lacking the flat space needed for advanced duelling tactics, you will have plenty of players in the central zone to snipe. Mordhau doesn’t often offer sniper like gameplay you see in other Battle Royales, but Mountain’s Peak should reward those with good aim.

Archer players should position themselves on this walkway and have fun taking out everyone in that central spot. It is important to keep an eye on your side though. Preferably, you should have an engineer or melee player with you to help control your pathway. If not, you need to be conscious of melee players sneaking up on you and of other archers. With two pathways to man, it is important to be using the the right perks to take out other archers. 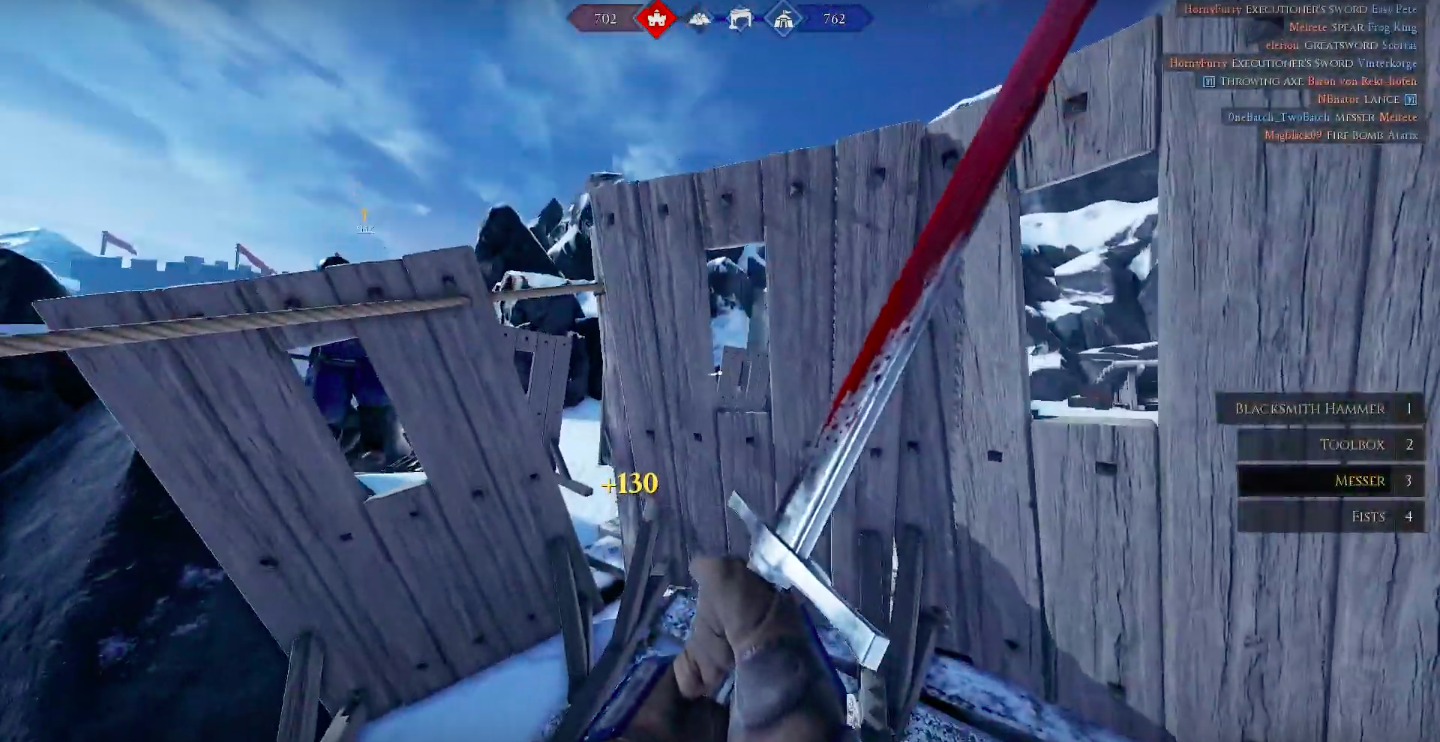 Surprisingly for a map centred on moving around vertically, there are horses. However, Horseback gameplay is quite limited here.

There is only one horse available for each team, making it a bit of a rush to actually win that spot in the first place. If you do manage to get the single available horse, you’re marooned in the central pathway of the map and spawn points. With the side pathways being smaller and easier to turn into a chokepoint, they are too dangerous to try and use a horse in. The strategy on Mountain Peak to keep your horse alive long enough to do some damage is to head from the spawn point into the central pathway, taking out other players. You have to retreat back to the spawn point or towards it fairly frequently since it is easier to get boxed in on this map. There isn’t much you can do about archers, but be conscious of them.

Engineers stand a better chance than horseback players. Using their structures, they should be able to turn the opening of any of the pathways into a chokepoint. If your team has some strong archers this is perfect for fortifying their position and taking control of the game. You can also use it to turn the central area into a chokepoint and take out horseback players. The mounted crossbow available to you can be used in any of the Archer spots too. Engineers have a versatile role on Mountain Peak. 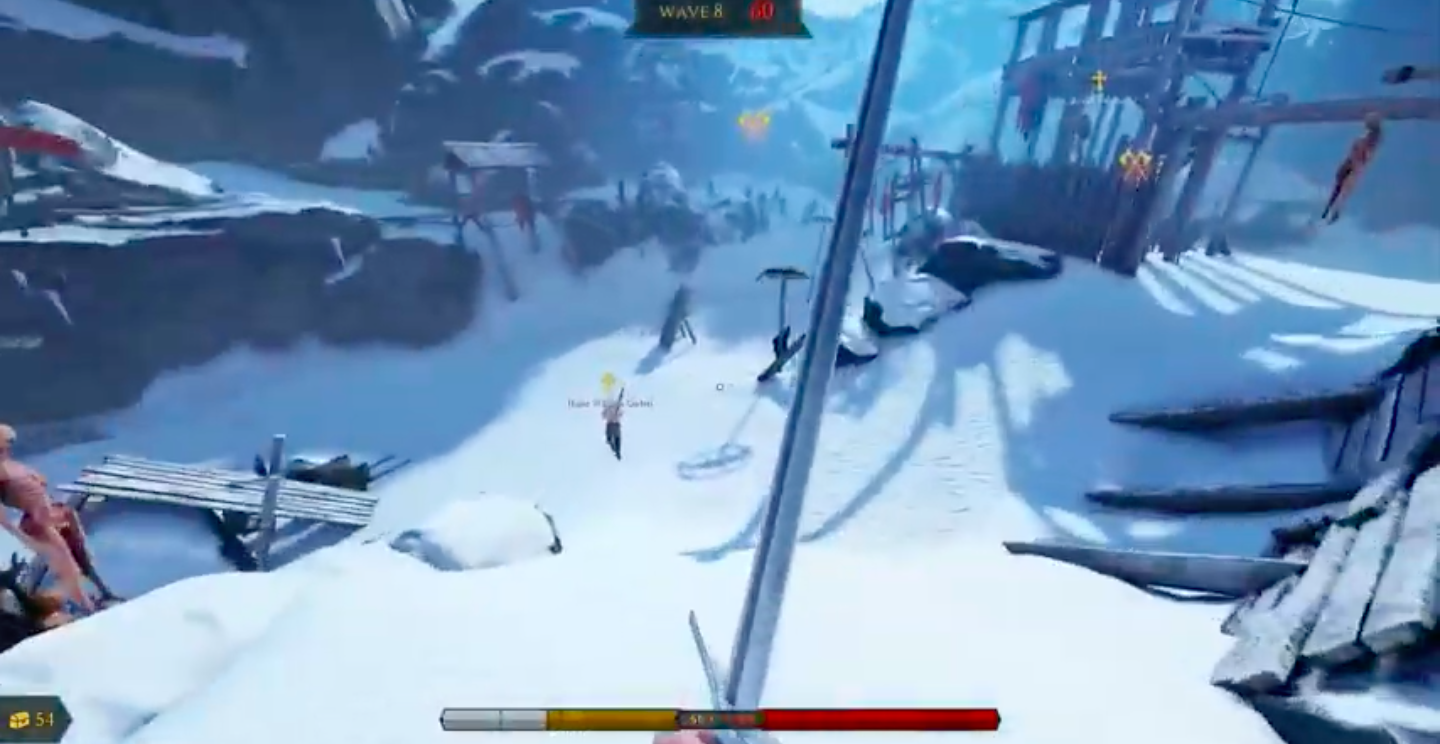 Mountain Peak is an archer’s playground; melee players are just their target practise. This is how it can feel when you try to duel here. While it is tempting to throw yourself into the central valley and take on the oppose ng team, this isn’t always the best place for a skilled melee player.

If the central zone is being dominated by archers, you can take them on up close and personal. Entering one of the side zones and clearing out the ranged players lets you stop the game from becoming too weighed down by their antics. While this can be effective, there is little safe space in Mountain’s Peak. A melee player with a shield stands a better chance if they’re adept at parrying projectiles. However, they won’t always aim somewhere that is blockable. You will be under fire from enemies quite a lot, consider this map good practise at evading shots.

Mountain Peak provides options for every type of Mordhau player, but some players stand a much better chance than others. You will have a lot more fun here as an Archer. However, it is also quite viable as other players. When you win a match on Mountain Peak as a horseback or melee player, there’s a sense of satisfaction in beating the level design. If you’ve got your strategy down and you’re running the best settings for Mordhau that you can, you should be able to win plenty of matches on Mountain Peak.